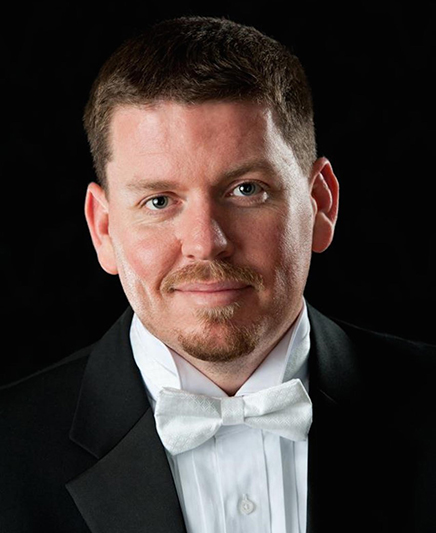 There was something about the sound produced by the Cincinnati Pops on that 4th of July evening that captured 7-year old Jim Daughters’ imagination.

Four years later, his mother rolled pennies until she could put a trombone in his hands. It was a good investment.

“Ever since the time I started playing in band, I’ve had that fire of music in my belly that I can’t get rid of,” said Dr. Jim Daughters, associate director of bands and coordinator of music education at Arkansas Tech University. “Now, seeing students who graduate from Tech with that same fire and that same passion who go to teach their students…it’s that continuous cycle that I love.”

Daughters is a quarterfinalist for the 2021 Music Educator Award presented by the Recording Academy and Grammy Museum.

There were approximately 2,000 nominees for the award. Only the top 216 from across the United States made the quarterfinal cut.

Daughters was anonymously nominated for the honor by some of his ATU students.

“I’m just really humbled and grateful that they thought of me,” said Daughters. “Music is my absolute passion, but I love people more. My teaching philosophy, first and foremost, is I truly love and care about every single one of my students. It’s about really and truly investing in people to make sure they are safe and that they feel welcome. That’s our job as educators…to love all of our students unconditionally and help them be the best possible versions of themselves. It just so happens that my vehicle to do that is music.”

Daughters was a drum major in the marching band at the University of Kentucky. He began his marching design career creating shows for his alma mater. Over the past 20 years, Daughters has designed 300 marching shows that have been performed by small high school bands, large high school bands and college bands.

A three-time graduate of the University of Kentucky, Daughters completed his Doctor of Musical Arts degree in 2017. The following year, after 18 years teaching in the public schools, Daughters was hired as associate director of bands at ATU.

“Arkansas Tech has such an amazing core of talent and tradition of excellence from (directors of band) Gene Witherspoon through Hal Cooper and Dan Belongia,” said Daughters. “We have great fans and great alumni. I want to continue to forward think the design of the shows that we have now and lead and innovate in this part of the country to give a really good model for what high school bands can aspire to be like.

“It takes a team of people, and I can’t talk about Dan Belongia enough,” continued Daughters. “When I came here two years ago, he was so warm and so welcoming. Now, he’s almost like a brother to me. The rest of our faculty in the music department, and our department head, Jeff Bright…everyone just works so well together. It takes that team of people to really create this culture of caring, nurturing and passion for music.”

That culture currently includes 220 members in the ATU marching band, known for generations as “Arkansas’ Band of Distinction.” It is the largest band in Arkansas Tech history.

“Our students are our best recruiters,” said Daughters. “They love each other. The word of mouth is great, and they work hard to get kids here just like we do. The bands are getting bigger and better, and there’s just this cultural movement within the music department that there is something really special here.”