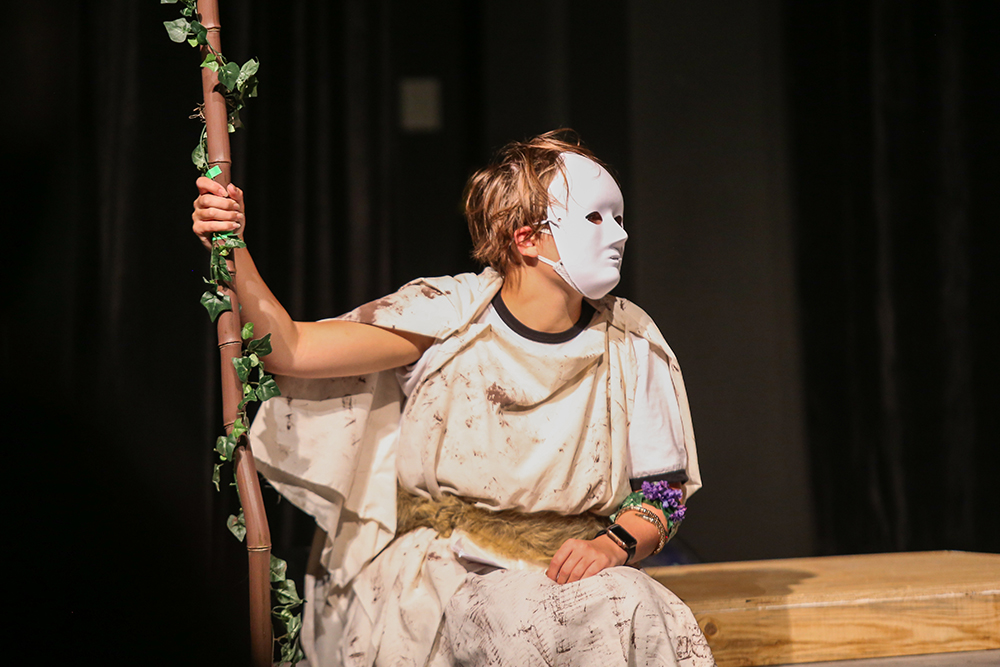 Arkansas Tech’s production also collected meritorious achievement awards for choral movement and ensemble as well as for craft and design.

Manami Ishimura, ATU visiting instructor of art, and her students in three-dimensional design won the craft and design award for the Greek masks they created for the performers in “The Bacchae.”

The Kennedy Center American College Theater Festival invites theatre scholars from around the region to respond to university play performances.

Scholars from New Mexico State University and the University of the Ozarks watched the ATU fall 2020 production online and responded virtually. Feedback from the scholars included plaudits for safely continuing live theatre in a pandemic environment and choosing a text as challenging as the one presented by ancient Greek playwright Euripides.

There was no live audience for the production, which was live streamed through a collaboration with Christie Kellar, broadcast production specialist in the ATU Department of Communication and Journalism, and her students. As of Monday, Nov. 2, the performances have been viewed more than 1,300 times.

The play was directed by David J. Eshelman, ATU professor of communication and director of the ATU theatre program. Frances Roberson, assistant professor of theatre, was technical director. Cynthia Eisemann, adjunct instructor of communication, was movement consultant and worked closely with the award-winning chorus.

“With the COVID crisis an ongoing challenge, the creativity, hard work and perseverance in producing such an impressive production is amazing,” said Anthony Caton, head of the ATU Department of Communication and Journalism.

Archived videos of ATU’s two performances of “The Bacchae” are available at www.facebook.com/ATUSTJ.

Learn more about the ATU theatre program at www.atu.edu/cj/theatre.php.