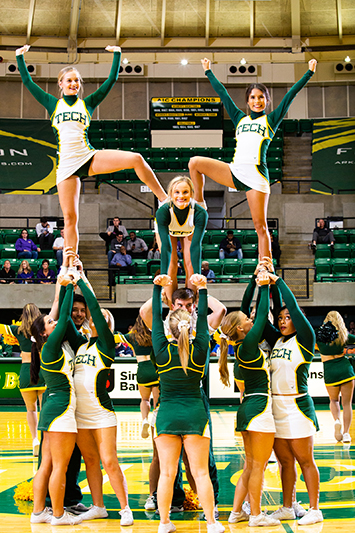 Harding University will be the first of four consecutive Great American Conference opponents to come into Tucker Coliseum in Russellville to face Arkansas Tech University over the next two weeks.

About the Golden Suns: Arkansas Tech has won four of its last five women's basketball meetings with Harding. Three of those four wins came by two points or less, including a 63-62 victory in the 2018 GAC Tournament championship game. Junior guard Ke'Vonshaye Stackhouse (10.4 points per game) and freshman guard Kaley Shipman (10.1 points per game) are the top scorers for the Golden Suns. Junior guard Jayana Sanders is Arkansas Tech's active leader in career points (773) and career assists (238).

About the Lady Bisons: Preseason favorite to win the 2019-20 GAC women's basketball title, Harding will enter play on Thursday part of a three-way tie for seventh place. The Lady Bisons are 11th in the GAC in scoring defense (71.4 points per game) and 10th in the conference in field goal percentage defense (.417). They were top three in the GAC in those categories each of the last three years. Junior forward Kellie Lampo leads Harding in scoring (13.1 points per game) and rebounding (8.1 per game).

About the Wonder Boys: An 0-2 road trip to Oklahoma last weekend dropped Arkansas Tech into sole possession of seventh place in the GAC men's basketball standings, but the Wonder Boys are just two games out of first place as they begin their four-game homestand. Arkansas Tech has won five consecutive games against Harding. Junior guard R.J. Glasper has averaged 20.8 points per contest in four career games against the Bisons. Junior guard Tony Hall is averaging 12.3 points per game and is 12-of-26 from 3-point range over his last four games.

About the Bisons: Harding has lost five consecutive games. Its most recent win was an 89-77 triumph at Henderson State University on Dec. 7. The Bisons' average margin of defeat in their last four games has been 27 points. They are in sole possession of last place in the GAC standings. Junior guard Romio Harvey (21.5 points per game) leads Harding and ranks fourth in the GAC in scoring. He and ATU's Hall were junior college teammates at Northern Oklahoma College.