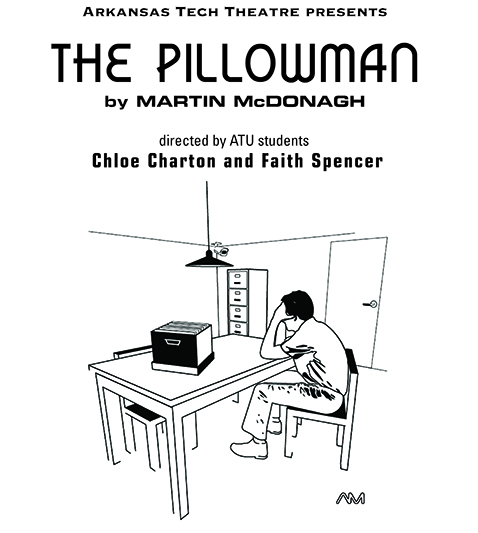 Arkansas Tech University students Chloe Charton of Ola and Faith Spencer of Clarksville will direct an on-campus production of “The Pillowman” by Martin McDonagh Thursday, March 12, through Saturday, March 14.

Performances will begin nightly at 8 p.m. in the Techionery Theatre, 1502 N. El Paso Ave. Russellville. Tickets ($8 general admission/$5 students) will be sold at the door.

Dr. David J. Eshelman, professor of communication and director of theatre at ATU, indicated that the production includes subject matter and language that are not suitable for all audiences.

“It is not immoral or even amoral, like a horror movie might be,” said Eshelman. “Rather, the play is staunchly moral, obsessed with difficult moral questions. For example, ‘The Pillowman’ questions what we in society do with people who have endured the unspeakable. It is a brilliant and intelligent play, but audiences should know what they are getting into. There are some disturbing moments. This play is not intended for children.”

Set in an imaginary totalitarian state, “The Pillowman” focuses on a writer, Katurian Katurian, and his brother, who are being interrogated over the mysterious murders of three children. The play originally opened on Broadway in 2005 with a cast that featured Jeff Goldblum. It has since been performed on numerous university campuses across the nation.

“This play, in my eyes, shows a deeply disturbing story of two brothers and the outcome of their choices throughout their life,” said Spencer.

Spencer and Charton have contributed to numerous ATU theatrical productions, including “The Robber Bridegroom,” “The Playground King,” “All the White Reasons” and “A Taste of Buffalo.”

“I hope that the audience sees the love in the show, despite all of the dark subject matter it contains,” said Charton. “It is not just about a series of murders. It’s about the bond between two brothers who would do anything for each other.”

As part of the ATU theatre program’s efforts to integrate technical advances into its performances, some of the monologues in “The Pillowman” have been converted into short films produced by ATU student Brady Williams of Fayetteville that will be included in the nightly performances.

“The films give us the ability to see the world Katurian creates in his stories,” said Williams. “Using the camera as a storytelling tool helps give us a new, more regulated perspective on how Katurian views the world.”

Stage actors for the ATU production of “The Pillowman” include Ian Werthmulller of Fort Smith as Katurian, Jacob Smith of Little Rock as Katurian’s brother and Jack Button of Springdale and Madeline Geels of Clarksville as the interrogators.

Codi Crowe of North Little Rock, Andrew Egan of Gamaliel, Gracie Folks of Harrison and Lane Peden of Marcella appear in the monologue films. Caleb Foshe of Fayetteville, Emily Porterfield of Bismarck and Sophie Sargent of Little Rock served on the film crew. Jack Button of Springdale edited the films.

“I’ve only been helping with sound for a few semesters,” said Lang. “Each play I’ve worked on has increased my love for theatre and knowledge in my craft. ‘The Pillowman’ is no exception, as I’ve had to face new challenges and learned many new tricks.”

Frances Roberson, assistant professor of theatre at ATU, is technical director for the production. Eshelman is producer.

“Students in my acting class a few years back discovered this play on their own as part of an open-ended assignment,” said Eshelman. “Before I knew it, theatre majors were reading this script, talking about it, doing scenes from it and petitioning me to allow a production. This kind of enthusiasm and initiative is typical of ATU students and should be rewarded.”

As result of Spencer and Charton’s involvement as directors, the ATU production of ‘The Pillowman’ was granted a place on the university’s Women’s History Month schedule of events.

“I’m thrilled that these two talented young women have been chosen to direct this provocative production,” said Anthony Caton, head of the ATU Department of Communication and Journalism. “The audience will no doubt be pleased with the results of their efforts.”

The play has been entered as a participating production in the Kennedy Center American College Theater Festival. Theatre experts from the region will attend a performance and provide their feedback.

For more information about “The Pillowman” or the ATU theatre program, call (479) 964-0890 or visit www.atu.edu/cj/theatre.php.