Participants in the 2020 Tech for Tech summit at Arkansas Tech University were greeted on Monday, Feb. 24, with a challenge from ATU President Dr. Robin E. Bowen.

“Let’s work together today, and beyond, to do more than reshuffle the deck,” said Bowen. “Let’s imagine the tomorrow that we want for Russellville…for the Arkansas River Valley…for Arkansas…and let’s make that happen.”

Approximately 100 experts in economic development, industry and higher education gathered at ATU for a conversation about emerging technology and future workforce needs.

O’Neal reported that Arkansas’ unemployment rate has remained steady at 3.5 percent in recent years while per capita income in Arkansas has increased by 19.4 percent over the last five years and 35.4 percent over the past decade.

As it relates to technology, O’Neal told the audience there has been a 460 percent increase in the number of Arkansas high school students enrolled in computer science classes as result of Gov. Asa Hutchinson’s Arkansas Kids Can Code initiative.

“The momentum in Arkansas is real,” said O’Neal. “By doing things like what we are doing today — bringing industry partners into a room, listening to them and responding to their needs — we demonstrate that the economic development team in Arkansas is large. Everybody is welcome to be on the team. Anybody who serves as an ambassador for your state or your community…certainly anyone who would take the time to be at an event like this and champion the cause of economic development…is on the team.”

The panelists identified problem solving, depth of understanding, communication skills and people skills as some of the most valuable skills they seek in potential employees.

“Our conversations today have reinforced an important notion: the time when we could be reactive to the changing world around us is over,” said Johnson. “The information that you, our guests, provided today will allow Arkansas Tech University to be proactive in developing curriculum and reviewing programs with an eye to the future. Knowledge is indeed power, and by sharing your considerable knowledge with us today, you have empowered Arkansas Tech University to do the important work of preparing students for the career opportunities that will exist 10, 20 and 30 years down the line.” 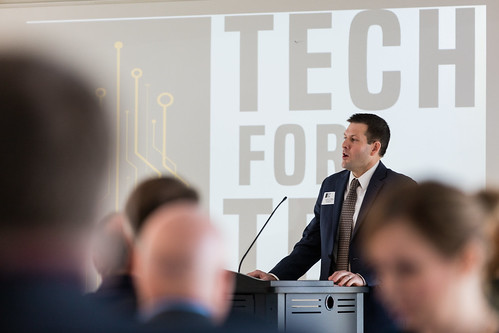