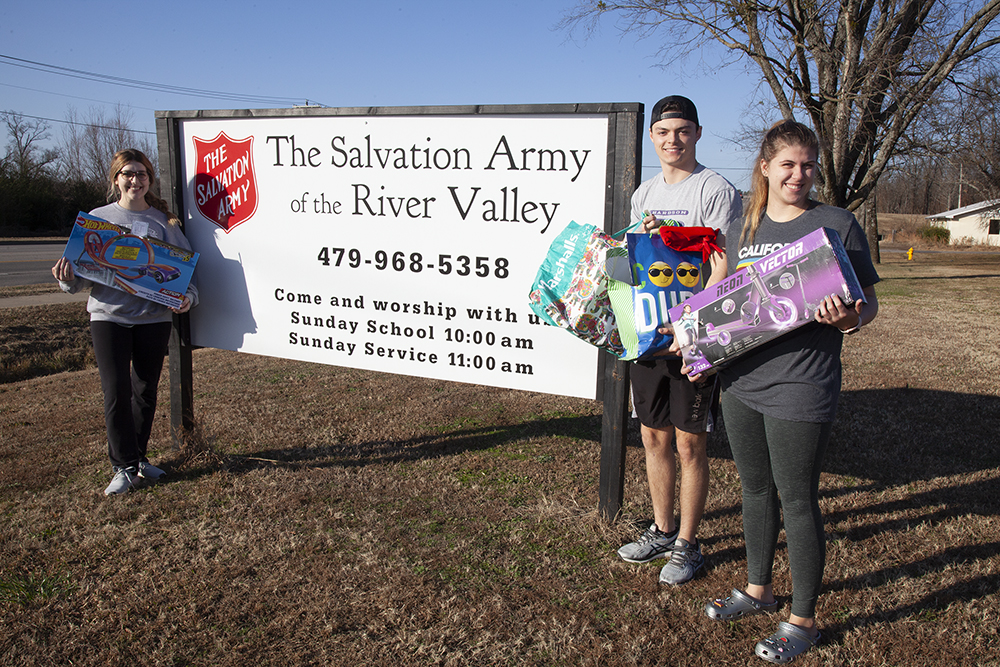 The most obvious benefit of providing avenues for Arkansas Tech University students to serve their community is the fact that citizens in need, such as the children served by the Salvation Army Angel Tree program, receive assistance.

But there is a secondary, educational benefit that is realized by the ATU students who participate in such volunteer efforts.

“It’s honestly shocking to even think there are that many children in need in the Arkansas River Valley,” said Lauren Brown, an ATU junior from Harrison and one of the students who helped organize and execute ATU’s 2019 Salvation Army Angel Tree project. “The fact that we’re able to give back to them just a little bit on Christmas morning makes me that much more thankful to be able to go to college. I’m excited that we get the chance to give back to them.”

The Salvation Army of the River Valley asked ATU’s Collegiate Panhellenic Council to find sponsors for 101 Angel Tree children in advance of the 2019 holiday season. Members of the ATU community adopted all 101 on a single night during a reception at Caraway Residence Hall.

This marked the fourth consecutive year that the ATU Collegiate Panhellenic Council has led an on-campus Angel Tree initiative.

“When we were taking our Angel Tree applications, we asked the parents what their children want and what they need,” said Needham. “A lot of them were saying socks and underwear. You start to think…a pack of socks and a pack of underwear is $6 or $7, and for some of us we can manage that. But if you are on a really limited income, $6 is a lot of money. It’s a choice between $6 for food or $6 for new underwear and socks, so you keep using things that are falling apart.”

Individuals and organizations interested in assisting those served by the Salvation Army of the River Valley may call (479) 968-5358.