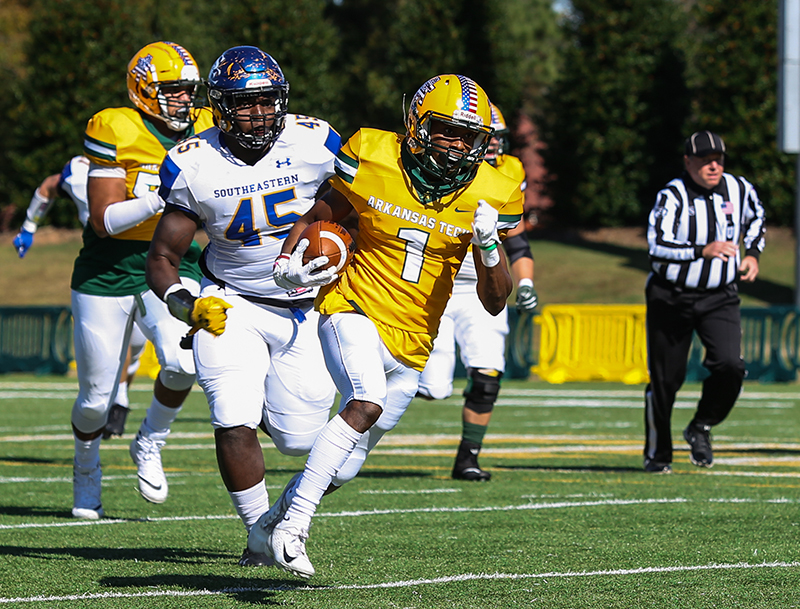 When Kyle Shipp was preparing to begin his first season as Arkansas Tech University head coach three months ago, he was intent on developing a culture of toughness and hard-nosed football.

He and the Wonder Boys will get a good measure of how far they have progressed in that pursuit when they host nationally 14th-ranked Harding University in the 2019 season finale on Saturday, Nov. 16. Kickoff is planned for 2 p.m. at Thone Stadium at Buerkle Field in Russellville.

“When you watch (Harding) on film, you just shake your head and think man, they are physical,” said Shipp. “From a defensive standpoint, they run to the football and attack the football very aggressively. Offensively, when you run the triple option, you must have a bunch of hard-nosed kids. They do a great job of it. This will be a good one to show us how it’s supposed to be done. I think our guys will be up to the task.”

The Bisons (9-1) have won nine consecutive games since a season-opening, 16-14 loss at Ouachita Baptist University on Sept. 5.

Harding will enter Saturday with an opportunity to clinch a berth in the NCAA Division II Playoffs and, if Henderson State University (9-1) defeats Ouachita Baptist (10-0), a share of the Great American Conference championship.

The Wonder Boys (3-7) find themselves cast in the role of potential spoiler. A victory would give Arkansas Tech four wins in its final five games after a 0-6 start.

“Our guys could have let go after week three,” said Shipp. “For those kids who have stayed with it, stuck through it and fought through it, they are going to be better people for it. They know how to fight through things. I feel like we have a really good group of kids. They understand the expectations now.

“We learned a lot about who we can trust and who we can’t,” continued Shipp. “We know who wants to be here and who doesn’t. That goes a long way in building culture. The kids see it, and they’ve told me many times we’re going in the right direction. This off-season will be extremely important. We can turn this thing around next year and have a winning season. I truly believe that, and these kids believe that. I’m excited about the future.”

Game tickets ($10 adults/$5 students and senior citizens) will be available at the stadium ticket office on Saturday during Party at the Plaza, the pre-game tailgating celebration on the Crabaugh Hall lawn. Tailgating will begin at noon Saturday.