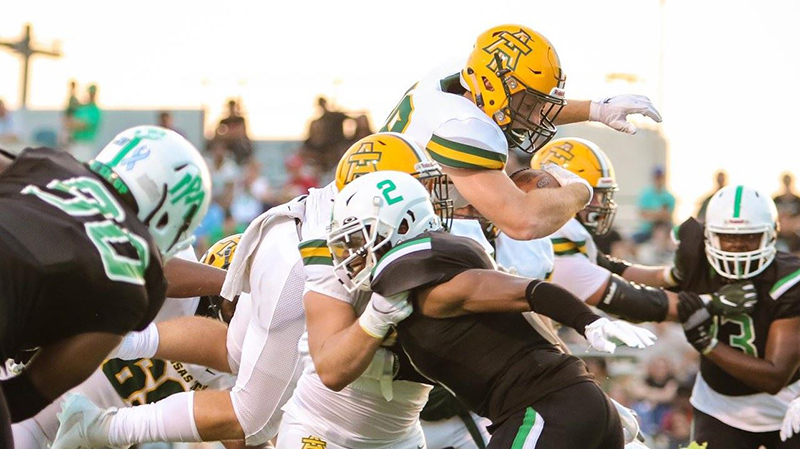 The Wonder Boys (0-1) jumped out to a 17-7 lead behind touchdown runs of 31 yards by Deon Simmons and 2 yards by Tanner Gaines as well as a 35-yard field goal by Jesus Zizumbo.

The Boll Weevils (1-0) began to turn the tide with a six-play, 67-yard touchdown drive just before halftime. Caleb Canady’s 32-yard touchdown pass to DeAndre Washington with 18.9 seconds left in the second quarter capped a drive that lasted less than a minute and cut Tech’s lead to 17-14.

Devonte Dean put UAM in front for the first time at 23-20 on a 16-yard touchdown run with 10.1 seconds remaining in the third quarter.

The Wonder Boys blocked the ensuing extra point attempt, opening the door for Zizumbo to later connect on a career-long 47-yard field goal that ultimately sent the game to overtime tied 23-23.

Arkansas Tech went on offense first in overtime and advanced the football to the UAM 6-yard line before an interception by Kerenzo Credit halted the drive.

A steady diet of Dean carrying the football allowed the Boll Weevils to matriculate inside the 10-yard line during their overtime possession. That set the stage for Marini, who also made a game-winning field goal for UAM on the final play of its final home game of 2018.

He walked off with a winning kick again and the Boll Weevils improved to 4-1 at home against Arkansas Tech during the GAC era.

Simmons finished with 11 carries for 90 yards for the Wonder Boys. ATU quarterback Manny Harris completed 12-of-32 passes for 143 yards. Drew Wade caught five of those passes for 77 yards and Chris Kale led the Tech defense with nine tackles.

Canady was 19-of-35 for 287 yards passing for UAM. Dean finished with 21 carries for 74 yards. C.J. Parham led the Weevil receiving corps with eight catches for 164 yards. UAM’s Christian Jefferson led all players with 12 tackles.

The Wonder Boys will return to action on Saturday, Sept. 14, with a GAC contest against nationally-ranked and defending league champion Ouachita Baptist University (1-0). Kickoff is set for 6 p.m. at Thone Stadium at Buerkle Field in Russellville.