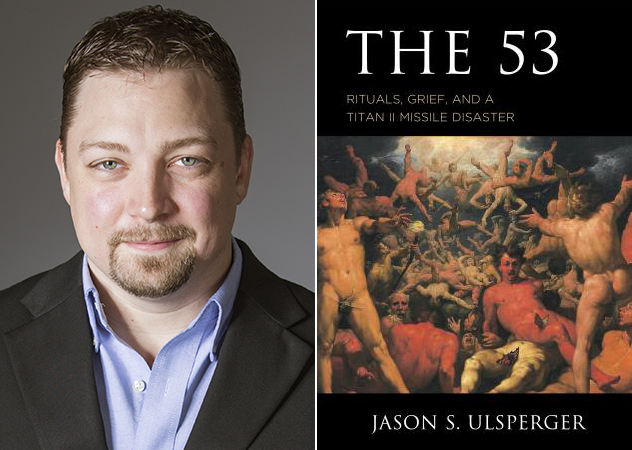 A member of the Arkansas Tech University faculty has authored a book that examines a Cold War-era tragedy in the Natural State and the lingering effects for the loved ones left behind.

Dr. Jason Ulsperger wrote “The 53: Rituals, Grief and a Titan II Missile Disaster,” which was published by Lexington Books in January 2022.

In the book, Ulsperger examines the deaths of 53 men at U.S. Launch Complex 373-4 near Searcy on Aug. 9, 1965. It remains the deadliest accident to occur in a U.S. nuclear facility.

Ulsperger researched the cause of the incident as well as the ways in which the children of the dead have coped with the loss for almost 60 years.

According to a synopsis provided by the publisher, Ulsperger’s book “gives new sociological insight on technological disasters and the sorrow following them.”

A member of the ATU faculty since 2006, Ulsperger is professor of sociology at Arkansas Tech. He is a two-time winner of an ATU Faculty Award of Excellence, having captured the honor in the scholarship category in 2013 and in the teaching category in 2015. Psychosocial Aspects of Death and Dying is among the courses he teaches.

He is past president of the Mid-South Sociological Association and a regional representative for Alpha Kappa Delta, an international honor society for sociology.

Ulsperger was the primary author of “Elder Care Catastrophe: Rituals of Abuse in Nursing Homes and What You Can Do About It,” which was published by Routledge in 2011. He has written more than 60 journal articles, book chapters and encyclopedia entries.

Learn more about the study of sociology at ATU by visiting www.atu.edu/behaviorsci.