Gov. Asa Hutchinson and approximately 125 representatives from the Arkansas Tech University and Arkansas River Valley communities gathered on the ATU campus in Russellville Wednesday, Feb. 5, to view and reflect upon an exhibit of portraits by photographer Gay Block.

The exhibit opening event for “Rescuers: Portraits of Moral Courage in the Holocaust” provided those in attendance with an opportunity to view portraits and learn the stories of individuals who risked their lives to save the lives of European Jews during World War II.

“These portraits honor those who, through the light of their own souls, protected a persecuted people,” said Hutchinson. “We are grateful for them. The rescuers represent the best of humanity, and they chose to protect others from the worst of humanity. These are people who tended to describe themselves as ordinary, but they displayed extraordinary courage in the face of evil. It is encouragement for all of us who consider ourselves ordinary that when the moment calls for extraordinary, we can act.

“We hope to find the will to do the right thing,” continued Hutchinson. “Most of us will never be faced with the circumstances, thank God, that these rescuers were faced with. But when you look at this exhibit, you cannot help but ask, would I have the courage of these people? Simply by thinking about it, we are more prepared to serve others. Ms. Block requires us to consider the risk of acting. She also requires us to consider the cost of failing to act.”

Block and her collaborator, Malka Drucker, traveled the globe during the late 1980s to photograph and interview approximately 100 non-Jewish Europeans who stepped forward as rescuers during the Holocaust.

The resulting exhibition was featured at the Museum Modern of Art in New York in 1992. A separate traveling show traveled to 50 venues over 11 years.

During her remarks at ATU on Wednesday, Block described the rescuers she interviewed as a widely diverse group that had some commonalities.

“Most possessed a serenity, and it is that serenity that we covet,” said Block. “What we learned from them was that one way to feel some peace in one’s old age is to have served others…to have done whatever we could to alleviate the pain we see around us in our immediate families, in our communities and in our larger world. Rescuers shared some common characteristics. They had extraordinary courage, of course. They possessed compassion. Perhaps most important is that these people did not avert their eyes. They looked to see what was happening in the world, and they decided to do something about it.”

Block expressed appreciation to President Dr. Robin E. Bowen, Vice President for Academic Affairs Dr. Barbara Johnson and Museum Director Dr. James Peck of ATU for the roles they played in bringing the exhibit to campus. She offered additional gratitude to her son, Rabbi Barry Block of Congregation B’nai Israel in Little Rock, and Dr. James Moses, professor of history at ATU, for their assistance in making the display of her portraits at ATU possible.

“The systematic, state-sponsored persecution and execution of the Jewish people during World War II is, without question, the darkest period in human history,” said Bowen during Wednesday’s opening event. “But if humanity has proven one truth time and time again, it is this: even in the darkest of hours, there are remarkable individuals among us who employ their courage and their determination to shine a light of hope.”

“Rescuers: Portraits of Moral Courage in the Holocaust” will remain available for viewing at the ATU Museum, 1502 N. El Paso Ave. in Russellville, weekdays from 8 a.m.-5 p.m. through the end of March. Admission is free and open to the public. 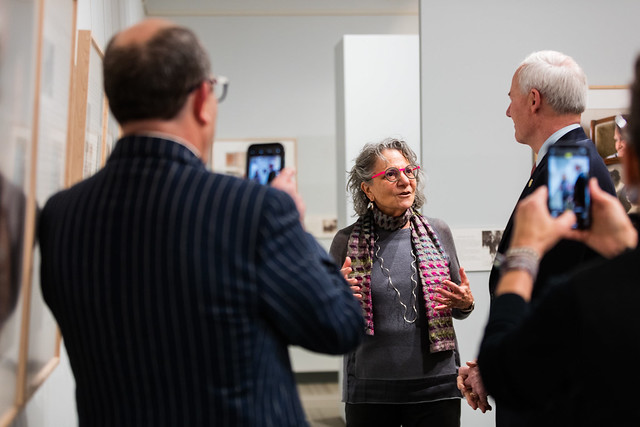