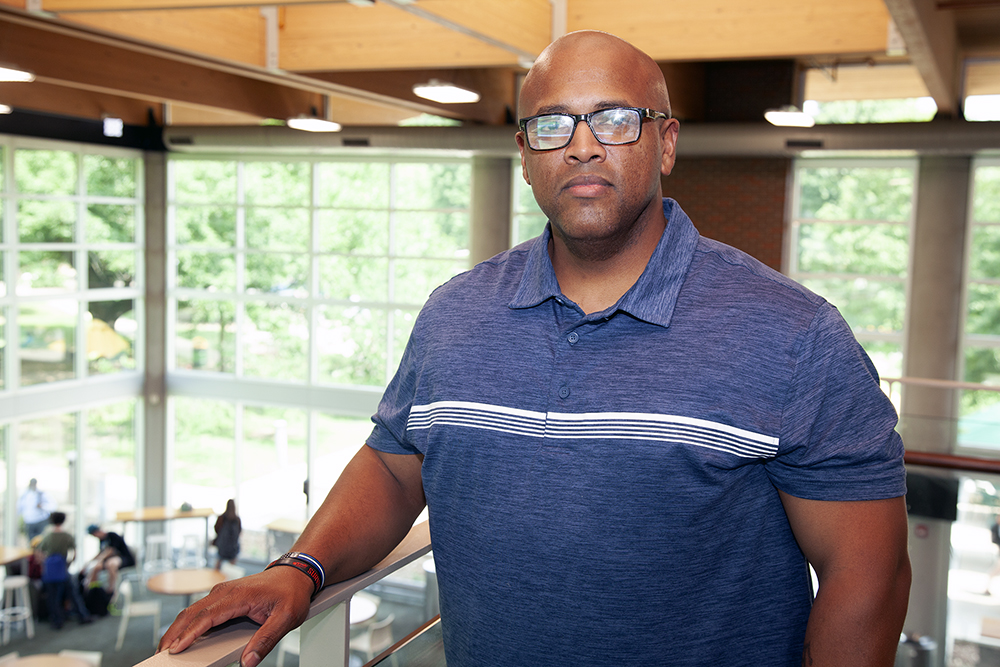 The statistics could have discouraged Joseph Wright from resuming his education.

But the statistics don’t account for the will that exists inside Wright and the team he has behind him.

“Me, growing up the way I did, getting my college degree is very important to me,” said Wright. “I’m taking 18 hours this summer because I want it. I’ve just got to have it. I know what all the studies and demographics say. Especially as a non-traditional student, it takes a lot. You have to have an internal drive and motivation.”

Wright is on track to earn an Associate of Applied Science degree in paramedic/emergency medical services from Arkansas Tech University-Ozark Campus in December.

A resident of Morrilton, Wright has 15 years of experience as a combat medic in the Arkansas National Guard and five years of civilian experience as an emergency medical services provider. He is employed by Pafford Medical Services in Clarksville.

In fall 2020, fueled by a desire for potential career advancement and the opportunity to set an example for his three sons, Wright enrolled at Arkansas Tech.

As he began his third attempt at college, Wright had one key element on his side that he knew would make the difference this time.

“So much of this rests on my wife (Kimberly),” said Wright. “She comes from a really good family, and when I met her is when I turned my life in a different direction. She’s my backbone. The other two times I didn’t have her.”

Another difference for Wright during his third attempt at a college degree has been the field experience he has gained in emergency medical services.

“You have to be caring and compassionate, but at the same time you have to be able to compartmentalize,” said Wright when asked about what it takes to work in emergency medical services. “It’s a fine balancing act. You have to be able to shut those emotions off in that moment. You can quickly see the people who aren’t cut out for it. Most people can’t do that and then be able to go on and function like a normal human being.”

Wright said he has felt comfortable sharing his knowledge with his fellow students during classroom discussions.

“Being an older person with 15 years of service and working on the civilian side for five years, I was able to bring that experience, especially on the trauma side of it,” said Wright. “It’s only a matter of time before you run into something really difficult. Some of my fellow students are in their early 20s, so having that experience and having my eyes and ears open for that amount of time, I am able to bring that perspective.”

Through his studies, Wright has become familiar with and inspired by Freedom House Ambulance Service, a predominantly African American organization founded in Pittsburgh, Pa., in 1967, that helped shape the modern emergency medical services profession.

“I feel like more people should know about that,” said Wright. “I’ve never seen that many Black people working in EMS in Arkansas. I’ve traveled up and down, side to side. It’s a great field. The paramedic technical degree only takes one year to earn.”

Wright is on pace to become the first recorded African American graduate of the ATU-Ozark associate degree program in paramedic/emergency medical services. He is interested in pursuing further study with an eye on a bachelor’s degree, perhaps in emergency management.

He credits his supervisor at Pafford Medical Services, Devin Holland, ATU-Ozark instructors Todd Birkhead and Holly Newman and ATU faculty member Dr. Tennille Lasker-Scott as being some of the key individuals who have helped him along his path.

“Everyone that I’ve talked to at Arkansas Tech has been extremely helpful,” said Wright. “I’ve gotten a lot of help, and I’ve needed a lot of help. No one has ever turned me away or said they didn’t want to help me, and I’m very grateful for that.

“If I didn’t have the right associations with my wife and my co-workers, none of this would have been possible,” continued Wright. “When you have that internal drive and get around the right people…atmosphere and environment, that’s a lot of it. There’s no way I could do this on my own.”