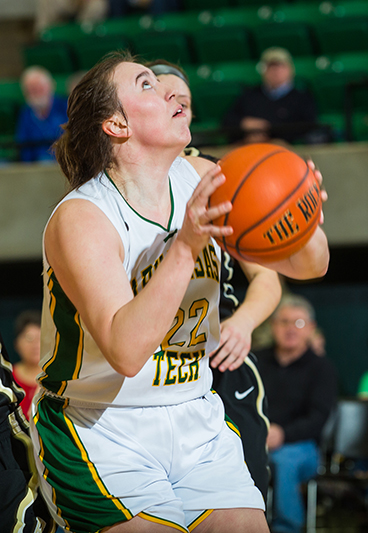 Defense down the stretch did it for Arkansas Tech University on Saturday afternoon.

The Golden Suns held East Central University without a made field goal for the final 6:41 and defeated the Tigers 71-69 at Tucker Coliseum in Russellville.

“I thought our defense was A-plus today,” said Dave Wilbers, ATU head coach. “(ECU) is hard to guard because they have good drivers and they run good offense, but we did a good job of staying in front of them and putting up a wall. The final play was a great example of that.”

After Lycia Peevy made 1-of-2 free throws to give Arkansas Tech (7-3 overall, 4-2 GAC) a 71-69 lead with 8.1 seconds left, ECU’s Madison Rehl drove the length of the floor and attempted a running 6-foot shot from the left side of the lane.

ATU’s Jayana Sanders was with her step-for-step on that drive, and it was Sanders’ defense that forced Rehl’s attempt at a game-tying shot to come up short.

Peevy pitched in a career-high 13 points for the Golden Suns, while Kaley Shipman added 11 points and six rebounds and Sarah Heard had nine points.

Arkansas Tech, which finished with a 14-4 edge in second-chance points, improved to 12-1 all-time in home games against East Central.

The Golden Suns will visit Southern Nazarene University for a 5:30 p.m. GAC contest at the Sawyer Center in Bethany, Okla., on Thursday, Jan. 9.