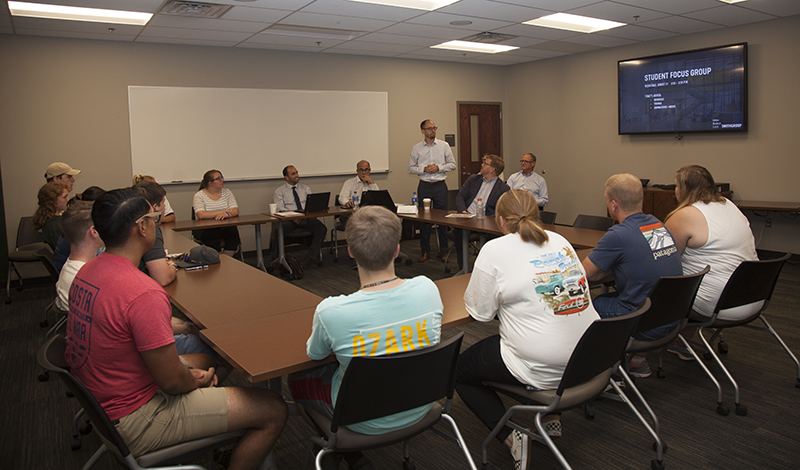 Architects from Miller Boskus Lack and SmithGroup visited Arkansas Tech University Aug. 20-22 to gather feedback in preparation for an upcoming project that will transform the core of the Russellville campus.

ATU students, faculty and staff participated in focus groups that will help Miller Boskus Lack and SmithGroup design Tech Plaza, a fusion project that is part of the ATU campus master plan approved by the ATU Board of Trustees on Oct. 19, 2017.

Once completed, Tech Plaza will include a new student union and recreation center on the plot of land currently occupied by the W.O. Young Building. The Young Building, constructed as a student center and opened in January 1959, is slated for demolition in 2020.

“The project will be paid for by a combination of funding sources,” said Bernadette Hinkle, ATU vice president for administration and finance. “The newly-implemented student recreation fee will help fund the project, so the recreation space is a priority. Additional funding will be necessary to support the construction. A bond issue, private donations and university reserves will bring the facility to fruition by fall 2022.”

The Aug. 20-22 visit by project architects was the first of four such visits they will make during the fall 2019 semester. In addition to the formal focus groups, the architects also conducted pop-up sessions at various back to school activities and gathering places.

“Understanding the needs of students is a top priority of the programming team,” said Hinkle.

A separate, but related project is the remodeling of the former swimming pool area in the Hull Physical Education Building. Planning for that remodeling project has begun. Hinkle indicated that construction will begin in spring 2020.

“The currently unused space in the Hull Building will be re-purposed to serve as a temporary student union, opening in fall 2020,” said Hinkle. “The space will be used to serve students in a variety of ways with additional programming. It will take the place of the Young Ballroom until Tech Plaza is completed.”

Long-term plans for the remodeled space in the Hull Building call for it to become a conference center once the new student union and recreation center opens.