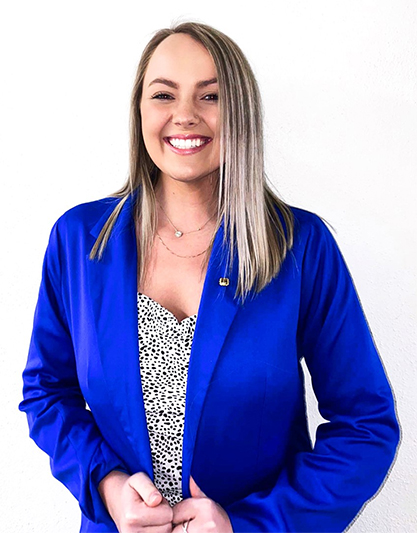 Brittany Shannon has been elected by her peers to serve as president of Arkansas Tech University Student Government Association during the 2021-22 academic year.

“I sought the office of the SGA president because of my need to help people,” said Shannon. “I am heavily involved in the community and on campus. I am not involved in everything strictly because it is what I want to do for myself. Rather, it is something I want to do for others. Being the president of SGA allows me to have connections I would not have with any other position on campus. I am the face of making things the best that they can be for the students, and that is my main goal.”

A marketing major from Clinton, Shannon has two years of experience in ATU SGA. She has fulfilled the roles of senator for the ATU College of Business, secretary of community outreach and vice president. Her committee work with SGA has included efforts on behalf of athletics, community connections and Jerry the Bulldog.

Shannon will come to the job with additional previous leadership experience as president for Phi Mu at ATU.

“I have learned that no matter the decision, there will always be at least one person who is unhappy and there is nothing that you can do about that,” said Shannon. “It will be that way no matter what situation is going on. I’ve learned I need to be confident that what I am doing is moral and right. Secondly, I have learned that sometimes doing the right things is going to be tough. But, doing something that isn’t easy has a bigger reward that is not yet in sight.”

Joining Shannon on the ATU SGA executive board in fall 2021 will be Kaitlyn Wright of Camden, vice president; Jorden Burgess of Shirley, secretary of public relations; Emily Bolen of Green Forest, secretary of finance and administration; Olivia Rowe of Paragould, secretary of student development; and Marquis Vasquez of Conway, secretary of diversity and inclusion.

“I hope to bring a joy and excitement that encourages people to get involved on campus and in the community,” said Shannon when asked about her goals for 2021-22. “I want to help bring the community and the students together in positive light. I will listen to criticism, concerns and positivity pertaining the university and do what I can to make it the best it can be. SGA can help the university transition back to normal in the fall by listening to students’ concerns and ideas and bringing those to life through our resources.”