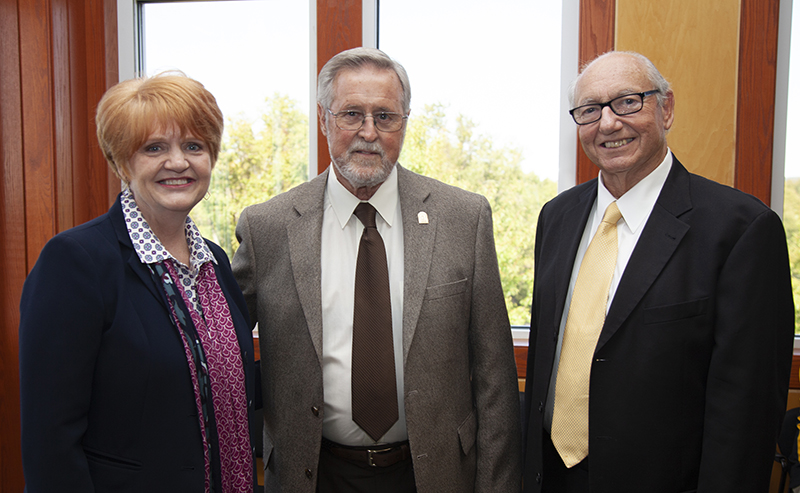 Jim Murphy of Russellville was recognized by the Arkansas Tech University Board of Trustees on Thursday, Oct. 17, for a $1.2 million pledge he has made in support of scholarships at ATU.

Fritz Kronberger, chairman of the ATU Board of Trustees, read a citation honoring Murphy prior to the board's meeting at Ross Pendergraft Library and Technology Center.

"Throughout the almost 50 years since his graduation from Arkansas Tech, Mr. Murphy has remained a steadfast and loyal supporter of his alma mater," said Kronberger. "He defines what it means to be a Wonder Boy."

Murphy was recruited to Arkansas Tech by Don Dempsey, then the head football coach at Tech, and Don Sevier, one of Dempsey's assistant coaches. He played on the offensive line for the Wonder Boys football team and was a key contributor on Arkansas Intercollegiate Conference championship teams in 1968 and 1970. He earned his bachelor’s degree in economics from Tech in 1971.

One of the driving forces in the creation of the Arkansas Tech Alumni T-Club for former student-athletes and coaches, Murphy has served on the Alumni T-Club executive committee from the inception of the organization in 2010.

In 2013, Murphy received Arkansas Tech’s highest honor when he was inducted into the ATU Hall of Distinction.

The endowment he has created through the ATU Foundation that will benefit the Arkansas Tech Alumni Association Scholarship and scholarship opportunities for international students.