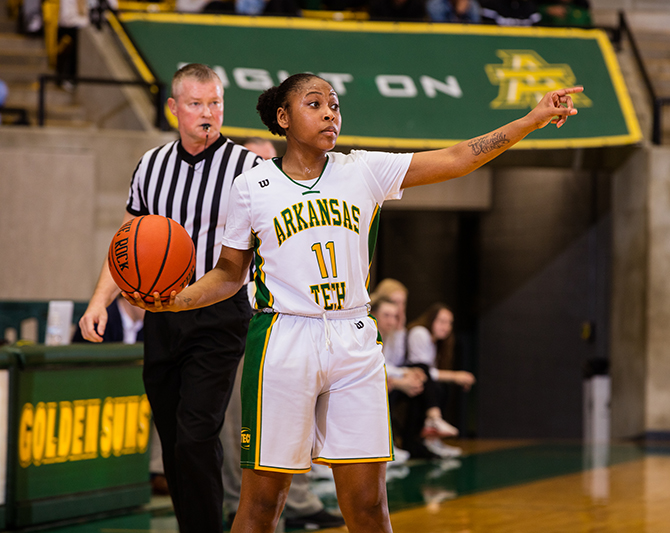 With the win, the Golden Suns (14-5 overall, 11-4 GAC) maintained a share of first place in the GAC standings with seven regular season games remaining.

“We played good defense down the stretch and were challenging shots,” said Dave Wilbers, ATU head coach. “(Ouachita) was only getting one shot. We did a great job rebounding all night. We struggled offensively, and I take the blame for that. I was calling some sets I shouldn’t have been calling. The GAC is the toughest league in the nation this year. The level of coaching in this league has increased dramatically.”

Sarah Heard started Arkansas Tech’s decisive run with an offensive rebound and put-back basket at the 4:09 mark of the fourth quarter. She capped it with a 3-pointer with 41.4 seconds left that provided the Suns with their final margin.

Heard finished with a career-high 25 points. She was 11-of-20 from the field.

Jayana Sanders notched a season-high 21 points for Arkansas Tech. She connected on 8-of-10 field goal attempts, including 3-of-4 from 3-point range.

Eden Crow paced the Tigers (4-17, 1-14) with 21 points. Maija Gertsone had 19 points, all of which came in the first half. Madison Raney had 13 points and 10 rebounds for Ouachita, which suffered a ninth consecutive loss.

ATU finished with a 53-31 rebounding edge and extended its overall winning streak to six games.

The Golden Suns will host Southern Arkansas University for a 1 p.m. GAC contest at Tucker Coliseum in Russellville on Saturday, Feb. 8.