Daughter of Davy King and Kim Kaye King, King is in her second year as an ATU student. She is a biology major from Rison. King won the Kristen Hayes Dance Award for her tap dance performance to the tune of “Lean On Me.” She also won the Red Carpet Award and the Naomi Shure On-Stage Interview Award. She was co-winner of the Zachary McClure Denison Leadership Award with fellow candidate Corinne Edelen of Springfield, Mo.

“It feels amazing,” said King moments after being crowned Miss Tech 2022. “I’m very excited. It means a lot to me because I love my university. To represent Arkansas Tech and go compete as Miss Tech in Miss Arkansas is going to be a lot of fun. I love the people of Arkansas Tech. They make it feel like my second home.”

King’s social impact initiative is Give Y.O.U. – Yourself to Others Unselfishly.

“It is about encouraging teens and others to volunteer,” said King when asked about her social impact initiative. “As Miss Tech, I can use this platform to encourage my fellow students to give of their time.”

Among the prizes that King receives as Miss Tech is a two-semester tuition scholarship at Arkansas Tech. In all, more than $24,000 in gifts and scholarships were awarded during the 2022 Miss Arkansas Tech competition.

The Lindsey Ahrens Vocal Award went to Rue Recinos of Alma, who sang and played guitar on “The Story.” Lexi Sharpe of Bentonville won the Virginia Bachman Scholastic Achievement Award as the candidate with the highest grade point average.

Other candidates in the 66th Miss Tech competition were Jazmyne Campbell of Yellville, Kaitlyn Norton of Woodlawn, Destanie Shubert of Monette, Kristin Hardy of Benton, Tara Ross of Lamar and Emmalee French of Dover.

Dr. Jim Collins, professor emeritus of agriculture at ATU, is in his 22nd year as executive director of the Miss Arkansas Tech University competition. Delta Zeta sorority sponsored the event for a 23rd consecutive year. 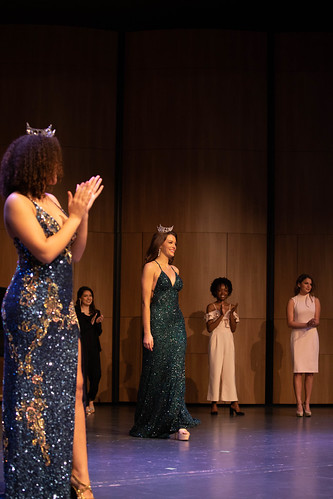