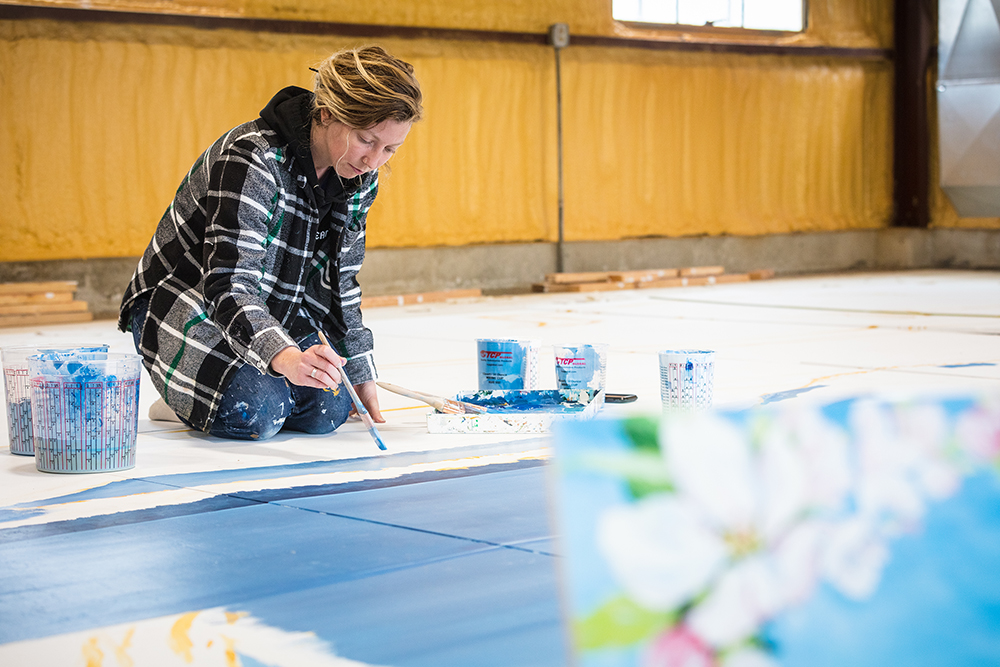 Tiffany Black had a plan to involve the surrounding community in a landmark art installation in Russellville Downtown as part of her spring 2020 artist in residence assignment at Arkansas Tech University.

Then, when the world changed in mid-March, what was intended to be a highly collaborative project was transformed into a largely solitary pursuit.

“There are always unknowns, although a worldwide health emergency was quite the curveball,” said Black. “I think that we have all been challenged in a big way to reach down deep for all the grit we can muster in the face of this pandemic.”

With the support of colleagues at ATU and partners at Main Street Russellville, a few good audio books and a lot of coffee, Black has carried on with the creation of a mural depicting Lake Dardanelle and Mount Nebo.

That scene was selected through an online vote after Liz Chrisman, director of photography services at ATU, provided several images as potential inspiration.

There was supposed to be a paint party as part of the project on April 4. It would have included live music and an opportunity for local citizens to contribute to the creation of the mural.

When it became clear such an event would be impossible due to the coronavirus (COVID-19) pandemic, Black turned to technology as her means of connection.

“I had been receiving a lot of positive feedback and excitement about the opportunity to paint on this giant surface with me, as well as a lot of questions regarding the creation process,” said Black, whose work is made possible through a grant to the ATU Foundation from the Windgate Foundation. “As I am now painting the mural solo, I have instead been sharing my process through social media. A couple of friends lent me a GoPro camera and a memory card, which I am using to create a time lapse of the entire mural. I am also sharing close-up progress photos that show my techniques. I am grateful that the virtual connectedness of social media exists during this time so I can still interact with those who are interested in this project and want to follow along.”

The content Black is capturing as her process unfolds is available at www.facebook.com/rivervalleymural.

The cancellation of the April 4 paint party also wiped out a planned food drive and fundraiser for the mural project’s charitable beneficiary, River Valley Food 4 Kids.

When the opportunity to generate financial support for the organization disappeared, Black turned to what she knows best to fill the gap.

“In lieu of putting on the event, I proposed that I instead redirect that time and energy into a second mural project,” said Black. “The mural for River Valley Food 4 Kids is also community oriented. We have asked kids, through their parents and teachers, to draw pictures of their favorite foods and tag us with the hashtag #food4kidsmural. Their artwork will inspire what I create for this mural. Besides the artwork created by local kids, I am also focusing on food education, such as gardening and cooking, and am finding inspiration in words like fresh, growth, excess, plentiful, overflowing, sharing and inclusion.”

Once completed, the second mural will be installed on the exterior of the River Valley Food 4 Kids location on North El Paso Avenue in Russellville.

As for her original mural, it is now scheduled for installation on the southwest side of McEver Hall so that pedestrians traversing the ATU campus may view and enjoy it.

A native of Danville, Ind., who lives in New York City, Black uses words such as warm, welcoming, supportive, compassionate and tenacious to describe the Arkansas River Valley community and the way it has responded to the pandemic.

Black paused her painting for a moment to contemplate her circumstances. She wore a T-shirt her father gave her as a gift. The shirt bears a simple, one-word message: Grit.

“These past couple of months, I have been reminded that while there is so much beyond my control, I am working with people who are aligned with my own values, and we are able to work together to reach the common goal of bringing beautiful public art to Russellville,” said Black. “My mantras are just do the next right thing, and don’t give up.”