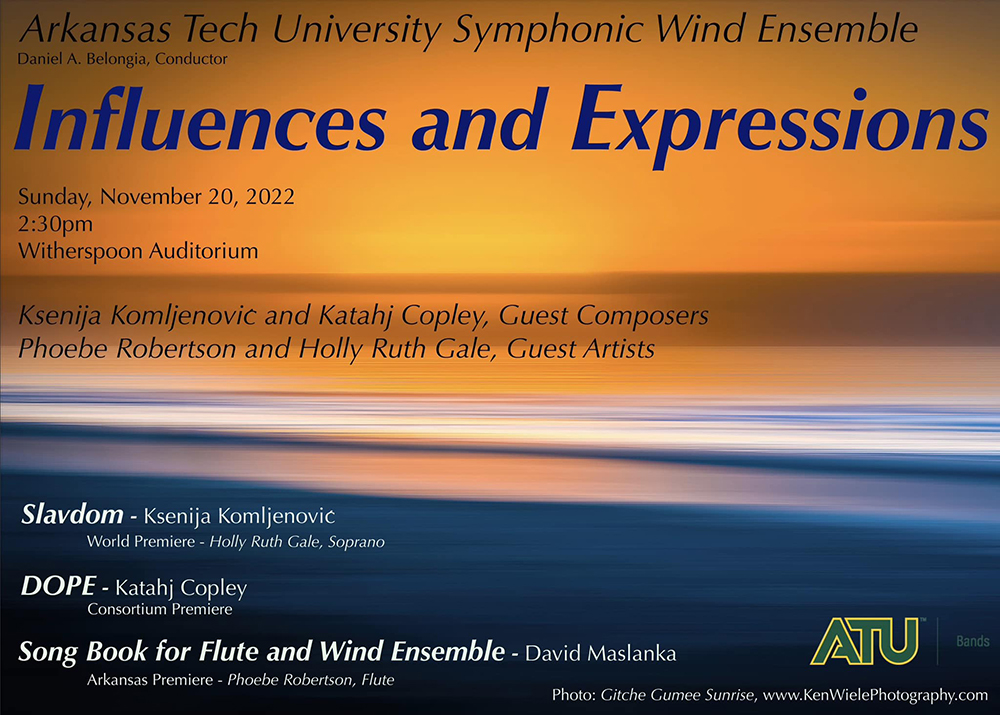 A world premiere performance. A composition that calls upon diverse influences to yield something new and different. A spotlight for a new faculty member. An expression of appreciation to a retiring faculty member.

It’s all part of the program for “Influences and Expressions,” a concert by the Arkansas Tech University Symphonic Wind Ensemble scheduled for 2:30 p.m. Sunday, Nov. 20. Admission to Witherspoon Auditorium, 407 West Q Street in Russellville, will be free and open to the public.

Under the baton of conductor Dr. Daniel A. Belongia, professor of music and director of bands at Arkansas Tech, the ATU Symphonic Wind Ensemble will debut a composition by Dr. Ksenija Komljenović entitled “Slavdom.”

“The piece came as an exploration of my roots, and my roots’ roots,” said Komljenović. “I think we’ve all been thinking about identity for a long time, and the conversations are a little different where I come from. My country’s demographics are a little different and my up-bringing was a little different. There were all these stories constantly about which tribes each country emerged from. The tribe the Serbian people came out of were the southern Slavs.

“You start thinking, where does the beginning of Serbia…my identity as it is in my passport…begin, and where does the previous one end?” continued Komljenović. “Where does the Slavic belonging end? It was just a very interesting journey in trying to find things that connect us across the Slavic culture.”

Holly Ruth Gale, ATU associate professor of music, will be featured as a vocal soloist on “Slavdom.” Gale has taught at Arkansas Tech since 1994 and became a full-time faculty member in 1997. She will retire as of Jan. 6, 2023.

“When Ksenija mentioned to me that the second movement might need a soloist, I said ‘okay, interesting,'” said Belongia. “(Gale) went to work immediately. It is not in English, so she needed to spend some time working on pronunciations and Ksenija, always the consummate professional, has provided every tool imaginable.

“Holly sounds fantastic,” continued Belongia. “I’m grateful that Ksenija and Holly have forged a friendship, and it’s a bit of an opportunity for us to have (Gale) on the front of the stage one more time for everyone to thank her for her musical contribution in the moment and her greater, meta contribution that is immeasurable and will continue. She’s not going that far away. We’re going to bring her back as often as we possibly can and she will continue to have a major influence on all of our lives.”

The second piece on Sunday will be a Katahj Copley composition entitled “DOPE.”

“It’s a gumbo of inspiration and kaleidoscope of myself,” said Copley. “When I first started my master’s program at the University of Texas, I was writing, I would say, good music, but I wasn’t really putting myself into that music.”

A conversation with one of his mentors, Omar Thomas, helped Copley find his voice. Copley began seeking inspiration from the music that speaks to him on a personal level from artists such as jazz saxophonists Kamasi Washington and John Coltrane, Australian jazz and funk band Hiatus Kaiyote, rapper Kendrick Lamar and bass guitarist Thundercat.

“We had a heart-to-heart about myself,” said Copley. “Typically, I don’t focus on myself as much as I should. We broke it down to the simplest thing…what music I listen to. I was naming band music because I’m a band kid and I write band music. (Thomas) told me that was great, but I’m more than that.”

The concert will conclude with a performance of “Song Book for Flute and Wind Ensemble,” which was composed by the late David Maslanka. It will mark the first time the piece has been performed in Arkansas.

Dr. Phoebe Robertson, who joined the ATU faculty as assistant professor of music this fall, will be featured on flute.

“As I listened to it, it completely captivated me,” said Robertson. “This piece is built around the four-part chorales of J.S. Bach. These were of massive influence in Dr. Maslanka’s life. Throughout his compositional career, that was his daily, almost meditation and warm-up to music…to play these chorales on the piano. You can feel, even when the music goes very far away from Bach, the influence of these chorales. The texts they set are beautiful and I think even more meaningful since (Maslanka’s) passing.”

Additional reflections from some of those who will contribute to Sunday’s concert are available in a video interview at www.arkansastechnews.com/a-conversation-about-influences-and-expressions.