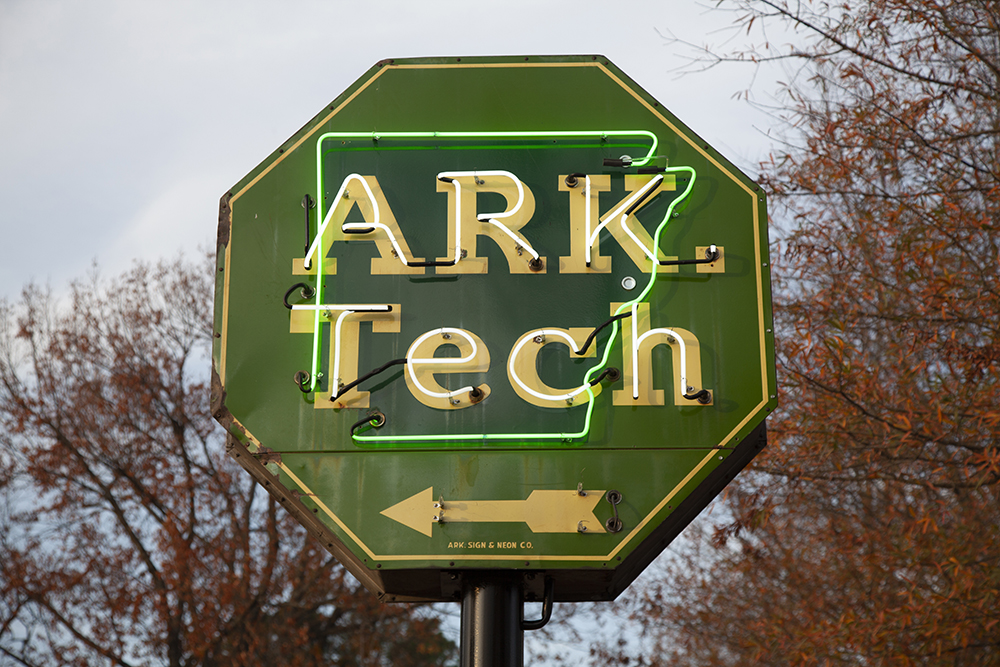 A neon sign that once pointed the way to Arkansas Tech University has been restored and returned to service outside the institution’s Alumni House at 1313 N. Arkansas Ave in Russellville.

The project was the brainchild of Sherry Nordin Polsgrove, who began working on it during her year as president of the ATU Alumni Association Board of Directors in 2018.

“I wanted something to be different about that year,” said Polsgrove. “I wanted a sign in front of the alumni office just to serve as a welcome back to our school.”

Polsgrove’s wish intersected with opportunity when a decades-old neon sign was found among archived Arkansas Tech items stored on-campus in the Techionery. The sign was once located at the intersection of today’s South Arkansas Avenue and East Fourth Street in Russellville as a means of directing travelers to campus.

A closer look and some research led to the discovery that Arkansas Sign and Neon in Little Rock had created the sign and was available to restore it. Donors stepped forward to make the project possible and the sign was sent back to its origin in Little Rock.

The restoration process began in 2019, and on Dec. 7, 2021, the sign was installed on the front lawn of the ATU Alumni House. Within a short time, Polsgrove’s social media feed was filled with images of her vision come to life.

“Since those pictures have been on Facebook…I just get excited about the enthusiasm of people who remember that sign,” said Polsgrove. “We’ve brought something back that is so positive and is so cool. It took a village. I wanted that alumni board to feel good about that year (2018). I saw that sign as a kid. I saw it as a teenager. And now I see it in a different place. When I drive by there, I’m going to smile, be proud about that and remember all the people who played a role in making it possible.”