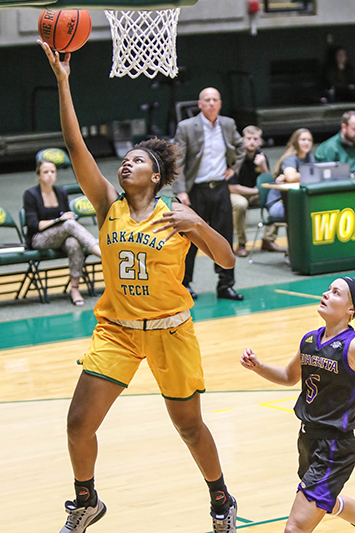 There was nothing unlucky about the number 13 for Arkansas Tech University on Thursday night.

The Golden Suns rolled up Ouachita Baptist 80-58 at Tucker Coliseum in Russellville to earn their 13th consecutive win in women’s basketball match-ups against the Lady Tigers.

Arkansas Tech (3-1 overall, 1-0 GAC) led 19-12 at the end of one quarter. Ouachita Baptist pulled within 27-25 with 5:34 remaining in the second period, but the Golden Suns closed the half by making seven of their final nine field goal attempts to build a 43-33 edge at the intermission.

ATU pulled away behind its defense. The Golden Suns held the Lady Tigers to 3-of-15 (20 percent) shooting from the floor in the third quarter. Arkansas Tech went to the final period leading 67-41 and maintained at least a 20-point spread the rest of the evening.

“I thought the first six minutes of the third quarter were really good,” said ATU head coach Dave Wilbers. “We made a conscientious effort to play on the backside of our defense. We were standing around some on the backside late in the first half. We did a good job early in the second half containing (Ouachita) and keeping them in front of us.”

Jalei Oglesby paced the Golden Suns with 20 points. She was 9-of-16 from the field. Oglesby also grabbed six rebounds and dished out three assists.

Kaley Shipman added 11 points for ATU. Fourteen Golden Suns appeared in the game, and 12 of them scored.

“That’s the key to our season,” said Wilbers when asked about his team’s depth. “Every player knows they have to get better or they won’t play. It’s a battle every day in practice for playing time, and in the games too. If you aren’t producing, you are coming out. We have players on the bench who can play.”

Ouachita Baptist has not defeated Arkansas Tech in a women’s basketball game since Jan. 9, 2014. ATU is now 69-15 all-time against the Lady Tigers, including a 37-3 record against OBU in games played at Russellville.

The Golden Suns will visit Henderson State University for a 1 p.m. GAC contest at the Duke Wells Center in Arkadelphia on Saturday, Nov. 23.