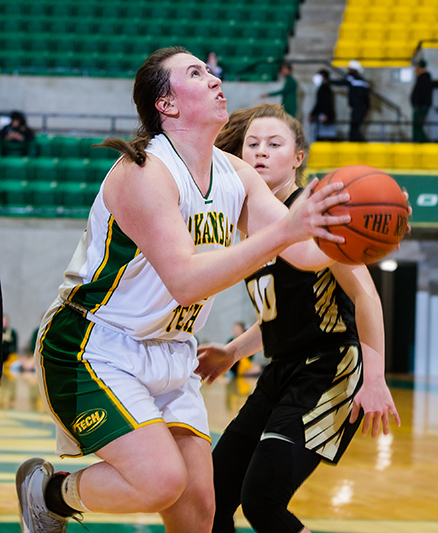 Arkansas Tech University is back in a very familiar position: atop the Great American Conference women’s basketball standings.

“Those two showed a lot of maturity and experience here today,” said Dave Wilbers, ATU head coach. “They made plays and hit free throws when we needed them. We played an outstanding fourth quarter, and it was all toughness. There are no easy games in this league this year, but in a way that’s been a good thing. It’s made us tough.”

Stackhouse finished with 21 points and 10 rebounds. It was her eighth career game with 20 or more points and her second consecutive double-double.

Southeastern Oklahoma State (13-5, 10-4) made six of its first seven attempts from 3-point range and surged to a 30-18 lead early in the second quarter, but a defensive adjustment by Wilbers got the Golden Suns back in the game.

Katie Webb, a senior guard for the Savage Storm, the top scorer in the conference and the leading candidate to win GAC player of the year, had 12 points in the first quarter.

Wilbers went to his bench and called upon Abby James to defend Webb. The freshman from Pottsville held Webb scoreless in the second quarter, setting the stage for an 8-0 half-ending run that cut Southeastern’s lead to 35-32 at halftime.

“Abby did a good job (on Webb) the first time we played them,” said Wilbers. “There was a period of time today when it looked like Katie might score 40, and she can definitely do that and more against you. Abby was able to shut her down. Ashley (Breathitt) also did a good job defensively during that stretch.”

The Savage Storm maintained a lead of between three and seven points for the first 14-plus minutes of the second half. Shipman tied the score 56-56 with a 3-pointer at the 5:27 mark, setting the stage for Stackhouse and Sanders to take over down the stretch.

Stackhouse’s 3-pointer with 2:10 left gave the Suns the lead for good. ATU made 5-of-6 free throws over the final 26.7 seconds to seal its fifth consecutive victory.

The Golden Suns will visit Ouachita Baptist University for a 5:30 p.m. GAC contest at Vining Arena in Arkadelphia on Thursday, Feb. 6.