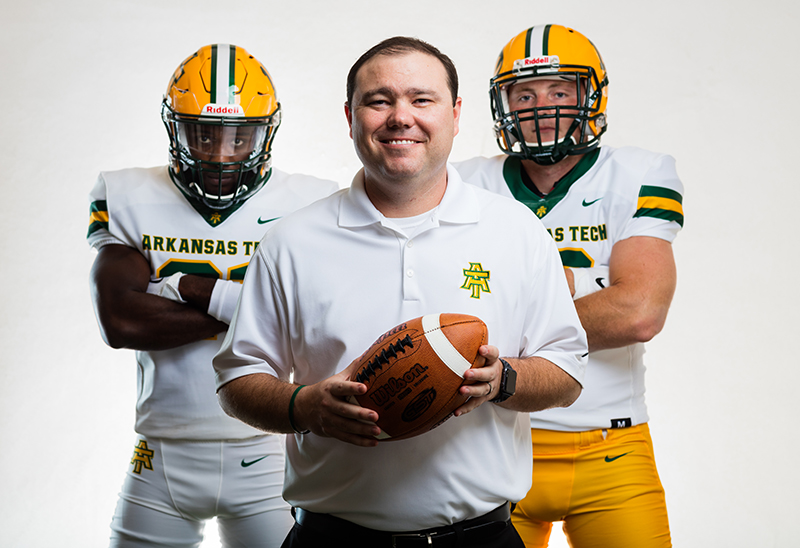 It’s a dream that began during two-hand touch football games in the corners of Morrilton High School’s Devil Dog Stadium, dimly illuminated amidst the shadows of Friday night lights.

Kyle Shipp knew from an early age that he wanted to be a college football coach. Three years wearing the green and gold as a Wonder Boy cemented his desire to pursue that goal at Arkansas Tech University.

Shipp’s appointment on March 6 ended the longest of those streaks. He knows that snapping the other two will begin with establishing a specific culture.

“We’re going to be a hard-nosed football team,” said Shipp. “I don’t want anyone in the stands to ever think our kids or coaches have quit. We might be losing, but we’re going to keep pushing hard and finish the game. I want that mindset to be in every single game. No. 1 is recruiting. No. 2 is getting guys tougher every day…mentally tougher and football savvy. If you have all your guys on that track, you have a chance to be successful.”

Outside of his family, no one has known Shipp longer than his fellow Morrilton High School and ATU alumnus, Cody Hill.

“If you meet Kyle on the street, he doesn’t strike you as someone who played college football,” said Hill. “What people don’t always get to see is his constant passion…his caring for the student-athletes. He wants them to do well, and not just on the football field. The thing that will make him successful is his ability to relate. Being the hometown boy from the Arkansas River Valley, growing up in this area, playing and coaching in this area…all of that is in his favor. Kyle never forgets a face or name. He can walk into Malvern High School and remember a guy he played against in high school. He has an uncanny ability strike up conversations with athletes and relate to them.”

That ability to communicate extends to the social media platforms that have become critical in recruiting the modern athlete.

“Being a little younger (34) than the average head coach, (Shipp) understands technology and what the kids are going through these days,” said Hill. “It’s phenomenal to watch. He can wow them with his ability to remember them. Kyle genuinely cares about Arkansas Tech. It’s our home. We romped and stomped on that campus and had a lot of fun. He’s very excited to be back and to do big things.”

Much like the prospective student-athletes he now recruits, Shipp’s ATU adventure began with a visit to campus.

“I knew I wanted to play college football and then become a coach,” said Shipp. “My mom and dad (Patty and Kenny Shipp) were both ‘you need to go see Arkansas Tech.’ I came on a visit, and everyone was just unbelievably nice and made it feel like home. For me, it was easy. At that point, I knew this was where I was going to school.”

Shipp played wide receiver at Arkansas Tech from 2003-05. He was a member of the 2004 Wonder Boys team that finished 10-2 overall and reached the second round of the NCAA Division II Playoffs. It is one of just four 10-win seasons in the history of Tech football, and the only one since the 1971 NAIA national runner-up team.

“Knowing that you can push yourself further than what you think you can was one of the biggest lessons I learned,” said Shipp when asked to reflect upon his playing days at Tech. “It makes you tougher as a person when you get done playing. It helps with your marriage, making decisions in life…it makes you a better employee, a better community member and overall a more headstrong person to get through the hard parts of life.”

Shipp’s partner in life is his wife of 10 years, Russellville native Krystal Carr Shipp. They welcomed daughter Emmie Lu to the family in 2018.

“Even when we are on vacation, Kyle answers texts and phone calls from his players and coaches because he genuinely cares for them,” said Krystal. “He never stops thinking about his players, coaches or the game. I love being a football coach’s wife, but it can be hard at times. Even though he has late hours, he tries to come home for dinner or bath/bed time for our daughter. I am proud to be married to Kyle and feel pride as I sit behind my husband’s team and cheer them on.”

Krystal understands the passion for Arkansas Tech that her husband possesses and his appreciation for the history of the university.

“He has talked about his ‘dream job’ of being the head coach at ATU since I started dating him,” said Krystal. “My grandmother, Shirley Leonard, currently has John Tucker’s bed in her house. Kyle has asked her several times if he can have the bed because it would mean so much to him to have the original Wonder Boy’s bed.”

Shipp served as a student assistant coach at Arkansas Tech in 2006, earned his Bachelor of Arts degree in history and political science the following spring and spent the 2007 and 2008 seasons as a graduate assistant coach for the Wonder Boys. He obtained a Master of Science degree in college student personnel from ATU in 2009.

Two seasons on staff at Arkansas State University were followed by a return to ATU, where he was a full-time coach on the offensive staff from 2011-13.

The University of Arkansas-Monticello hired Shipp as its offensive coordinator in 2014. Steady improvement over the next five seasons reached its zenith when Shipp’s 2018 UAM offense averaged 398.6 yards per game, second-most in the Great American Conference.

That 2018 group of Boll Weevils registered the program’s first winning regular season since 2008 and its first postseason appearance in a quarter-century. A last-second field goal and a win over rival Southern Arkansas University on the final day of the regular season clinched both of those achievements.

“Our kids could have quit, but they kept the faith and believed in us as coaches,” said Shipp. “Honestly, that SAU game was like we’d won the Super Bowl. Our kids were so excited because the program hadn’t had that kind of success in 25 years. They saw their hard work pay off, so that was a very special moment for everyone involved.”

Two hundred and 99 days after that unforgettable win by the Boll Weevils, Shipp will return to Convoy Leslie Cotton Boll Stadium. This time he’ll be wearing dark green instead of kelly green, and he’ll be standing on the east sideline as opposed to the west one.

Shipp’s first game as head coach at Arkansas Tech is booked for Thursday, Sept. 5, against UAM. He described that coincidence as “bittersweet,” but not one that will detract from the moment of leading the Wonder Boys onto the field for the first time.

“It’s a huge honor for me,” said Shipp. “I’ve told many people that this is a dream job for me. I gave a lot of years to (Arkansas Tech). I love this place. The biggest thing I want from our guys is to play four quarters, and if we have to go a little more, we go a little more.”

Sometimes playing four quarters refers to a football game. Sometimes it means helping a young person finish the job in the classroom and prepare for the life-changing benefits of a college degree.

“At the end of the day, we are judged by the wins and losses…and I understand that,” said Shipp. “But if I don’t help kids get an education, I haven’t done a good job. I could be the winningest coach of all time, but if I fail to help kids graduate, I don’t know how good a job I really did.”