One night, six years out of high school and unfulfilled by the career path he was on, Chris Wells of Hot Springs made a life-changing announcement to his wife, Stevie.

“I came home and told her that I was going back to school the next semester,” said Chris. “That was it. There was no changing it or not accomplishing it. And that’s what we did.”

“It’s very surreal right now,” said Chris the day before he and Stevie walked across the Tucker Coliseum floor and received their degrees from ATU President Dr. Robin E. Bowen. “It doesn’t feel like it’s actually happening. It’s been such a long process.”

The process began at National Park College in Hot Springs. After completing their associate degrees at their hometown school, Chris and Stevie moved to Pope County and enrolled at ATU.

That’s about the same time their party of two increased to include their daughter, Evelyn, who was born during Chris’ and Stevie’s first semester at ATU.

“We couldn’t have classes at the same time the first couple of semesters,” said Chris. “Someone always had to be with the baby, so (Stevie) would have a class in the morning and then I would bring our daughter up here to campus. We would pretty much trade off, and I would go to class, and then we’d do that a couple of times a day some days.”

Stevie explained those hand-offs often took place in the second floor lobby of Rothwell Hall. It was there that Evelyn found her own major field of study: forward propulsion. Or, in layman’s terms, walking.

“(Evelyn) has always been the center of attention,” said Stevie. “She lights up when people give her attention, so she would toddle over to people and make friends. People knew she would be there every Monday, Wednesday and Friday.”

Being a new mother away from her hometown was difficult enough. With the additional stress and rigor of upper-level mathematics courses, there were times when Stevie thought about walking away from her educational aspirations.

“(Chris) really got me through it,” said Stevie. “I didn’t think I could do it. There were people here on campus…I wouldn’t be here, about to graduate, without some of them.”

Keisler provided the most memorable moment of Stevie’s ATU education.

“Dr. Keisler makes it clear on the very first day of class that you could be called up to the board at any time and it’s your job to figure it out,” said Stevie. “I wasn’t used to that teaching style, so I wasn’t sure how I would do in the class. There was one day he called me up there, and I worked on this problem for three days…three different class periods. I just wasn’t getting where he wanted me to get to.

“He kept giving me nuggets of encouragement,” continued Stevie, “and there was a moment when he took his marker and started tapping the board. You could see him jumping out of his skin because he knew I was right there and just about to get it. I got it, and he whispered to me, ‘this is why I picked this problem for you.’ In that moment, I was angry and couldn’t believe it had taken me that long to get this problem finished, but in that one moment, a switch flipped inside me. I knew I could do hard things.”

Chris points to Dr. John Krohn and Dr. Wayne Helmer, professors of mechanical engineering, as the faculty mentors who made the biggest difference in his two years at ATU.

“Dr. Krohn really helped me get comfortable with the transition (to ATU) and was very helpful in anything I needed,” said Chris. “(Dr. Helmer) helped not only through the classes, but he was our advisor on our senior project and he didn’t just help with our projects. He gave real-life advice, and that was something that was good to hear from someone who has years of experience professionally in the industry and teaching.

“I enjoyed going to my classes,” continued Chris. “The tests are the more stressful part, but as far as actually going to class and learning the different information, I thoroughly enjoyed it because you could see how much (Dr. Krohn and Dr. Helmer) care about what they are teaching. That really makes a difference.”

Chris is interviewing for positions that will allow him to apply his mechanical engineering degree.

A career fair hosted by ATU Norman Career Services connected Stevie to an internship with Electric Cooperatives of Arkansas that has become a full-time job, which she will begin shortly after graduation.

Regardless of where their path takes them from here, Chris and Stevie collected more than knowledge, degrees, memories and friends on their journey to graduation day. They added a member to their family and new meaning to their lives.

“It certainly changed my perspective on what’s important,” said Stevie when asked about becoming a parent. “You go from thinking about yourself and your dreams to what can I do to give this tiny person everything. If (Evelyn) doesn’t go (to ATU), I’ll be surprised. It’s such a full circle thing. Maybe one day we will see her walk across the stage here.” 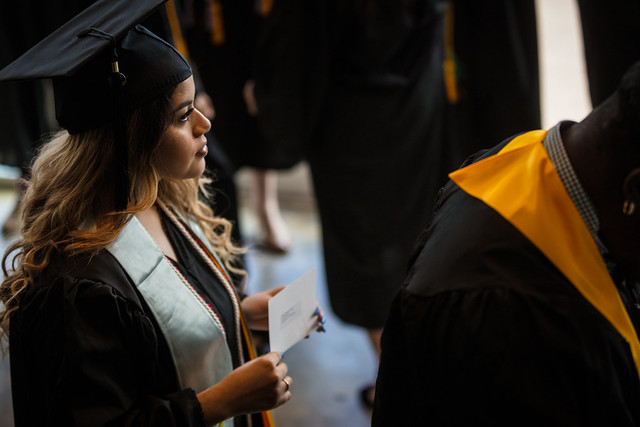