Jalissa Gum received the Jeanice Falls Award and Trey Martin was presented with the John E. Tucker Award symbolizing their achievements as the top senior student-athletes at Arkansas Tech University during the Techspys award banquet on Wednesday night.

Gum is a four-year member of the Arkansas Tech softball program. A product of Red Rock, Okla., she is the Golden Suns’ all-time leader in career strikeouts in her role as a right-handed pitcher. Gum was named All-America and Great American Conference pitcher of the year in 2016. This season, Gum is 16-10 with a 1.58 earned run average as a pitcher. She carries a .301 batting average with seven home runs and 34 runs batted in.

Martin earned two letters with the Arkansas Tech football program. In his role as a starting offensive lineman, he helped the Wonder Boys gain 9,874 yards of total offense during the 2015 and 2016 seasons combined. Over that span, Tech averaged 34.1 points per game. Martin, who calls Lake Hamilton home, was selected All-GAC honorable mention in 2015 and GAC All-Academic in 2016.

Among the other awards presented on Wednesday was a special recognition for Peggy Gregory, who will retire from her role as an administrative assistant in the ATU Department of Athletics at the end of the 2016-17 year. 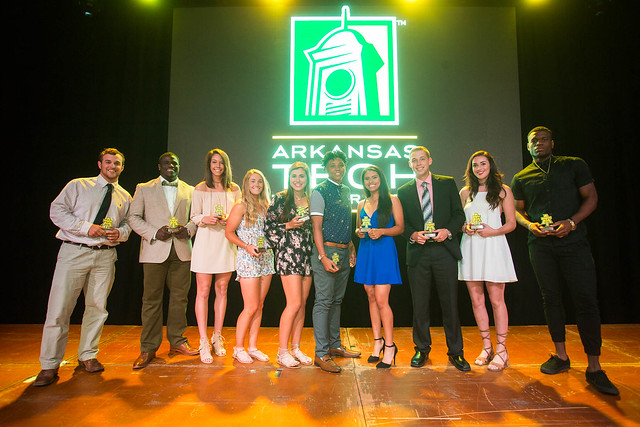