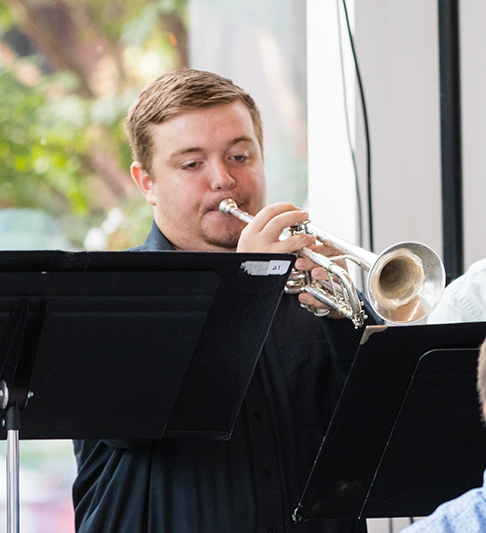 Arkansas Tech University senior David Hall was one of four student trumpet players from around the United States chosen to perform in a master class hosted by the Metropolitan Opera Orchestra Musicians on Sunday, Sept. 13.

“It’s mind boggling,” said Hall when asked about the performance. “I’m just so excited. It’s my opportunity to show the quality of instruction we have (at Arkansas Tech). I’m really grateful for everyone who has supported me so far.”

Hall played “Légende,” a piece written by George Enescu in 1906.

His audience included some of the top classical musicians in the country, each of whom gave their time for the benefit of young and emerging talent such as Hall.

“The idea of professionals, the best of the best, giving back has been happening throughout the COVID-19 pandemic,” said Hall, who was encouraged to apply for the master class performance by Dr. TJ Perry, assistant professor of music at ATU. “It has been a great time to learn more about who is out there, and for those of us who aspire to be professionals or better ourselves at our instrument, it has been an opportunity to find out what good really is and learn.”

The experience allowed Hall to interact with one of his musical heroes, Billy Hunter, principal trumpet for the Metropolitan Opera Orchestra.

As he improved and became a prospect to continue playing trumpet after high school, Hall’s college choice was made easy by the ATU alumni who provided his education in the Cabot School District.

“I had great band directors at Cabot who really showed me the love for music that I’ve carried through my education,” said Hall. “All three of my high school band directors (Joe Trusty, Kara Reynolds and Rusty Hart) were Tech alumni, and several of my other teachers outside the music department were Tech alumni. They all taught at a very high level, and that made me think I wanted to go (to ATU) if it meant I would turn out like them. If you want to be great, you have to go where the greats went.”

Hall joined the ATU Symphonic Wind Ensemble during the second semester of his freshman year. As a result, he has attended such events as the College Band Directors National Association Southwestern Division Conference in Houston, Texas, and the Midwest Clinic International Band and Orchestra Conference in Chicago, Ill.

“One of the things that keeps me driven is where I’ve been already and how much further I could go if I continue to push myself to improve,” said Hall, a two-time recipient of the Bob Bright Trumpet Scholarship at ATU.

Son of Eileen and Dave Hall and a senior music education major, Hall will graduate from ATU in May 2021. His career goal is to become a music faculty member and teach trumpet at a university.

“I’ve always been on a path of playing trumpet so I can get into a position to teach,” said Hall. “This opportunity will help me get my name out there, and hopefully this will put me further down that path.”