Approximately 100 members of the Arkansas Tech University community celebrated the life and legacy of Dr. Martin Luther King Jr. with a march and service project on Tuesday, Jan. 15.

In a matter of just 12 minutes, the students, faculty, staff and alumni in attendance assembled more than 1,000 personal hygiene kits by utilizing an assembly line system in the W.O. Young Building Ballroom.

The kits will be distributed to those in need by local organizations such as the River Valley Shelter for Battered Women and Children, the Boys and Girls Clubs of the Arkansas River Valley, Main Street Mission, the Salvation Army and the Russellville Goodwill store.

"The life of Dr. King means, to me, a life of hardships and overcoming," said Jay Anderson, an Arkansas Tech senior from Little Rock who is majoring in psychology and communication. "He was such an inspiration to people not only in America, but on an international level people are inspired by the words of Dr. Martin Luther King. For me, growing up we had days of reflection and service like this one. It humbles me, and even though a lot of people may not be aware of all the history, this gives them a chance to reflect and feel motivated because of it. Our community service symbolizes that there is always someone out there who needs help."

The event, which was organized by the ATU Department of Diversity and Inclusion, also raised non-perishable food donations to benefit the Green and Gold Cupboard at Arkansas Tech.

Senior Natari Irvin of Jacksonville and junior Victoria Wilson of Little Rock offered remarks at Hindsman Tower in advance of the campus march.

"Being an African-American student here at Arkansas Tech University has made a big impact on where I've come from and where I am at now," said Wilson, who has worked as a resident assistant and holds membership in Zeta Phi Beta sorority. "I've learned a lot about diversity. Being a part of this is something that is inspirational for me."

Learn more about the ATU Department of Diversity and Inclusion. 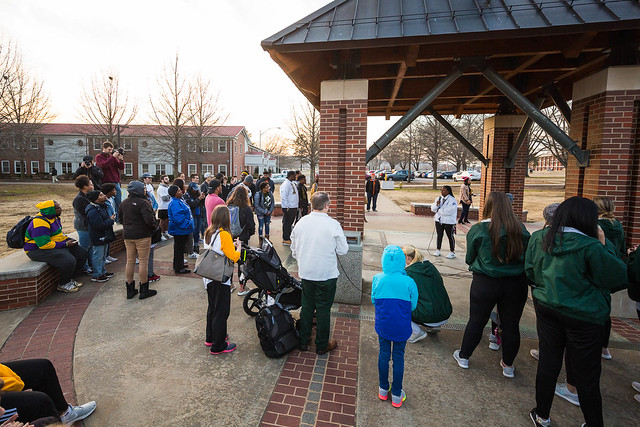