Jim Collins’ life was forever changed the week before his sophomore year at Mississippi State University.

“My mother died unexpectedly and suddenly,” said Collins. “Maybe I was naïve, but I wasn’t really worried about money. We just went to college. I mowed yards in the summer, but there weren’t scholarships back then like there are now. So, my uncle, Dr. Lewis Cook, sat me down and told me ‘don’t worry about college, it’s taken care of.’ Well, he thought I was going to get like a welding certificate. Nine years later I had my doctorate.”

Collins never forgot that act of kindness. He has repaid it through his teaching and philanthropy on behalf of Arkansas Tech University students, all the while displaying his trademark blend of sincerity and humor.

On Tuesday, Aug. 3, Arkansas Tech dedicated the Dr. James “Jim” Collins Agriculture Classroom in his honor. Located on the Tech Farm, the classroom and the adjoining greenhouses were the location for countless horticulture lessons imparted from Collins to his ATU students during a full-time teaching career that spanned 34 years.

His contributions to ATU beyond the traditional classroom have included overseeing the annual Arkansas Tech Department of Agriculture plant sales for 34 years and serving as executive director and master of ceremonies for the annual Miss Arkansas Tech University competition.

He has maintained his volunteer duties with the Miss Arkansas Tech competition since his retirement. The event routinely provides more than $20,000 per year in assistance to the Arkansas Tech students who participate in it.

“Dr. Collins’ leadership of the spring and fall plant sales allowed him to become an ambassador from Tech to the community,” said Dr. Judy Cezeaux, dean of the ATU College of Engineering and Applied Sciences, during the dedication ceremony. “His service as executive director and master of ceremonies for the Miss Arkansas Tech University competition continues to provide a literal stage for his personality and sense of humor to shine.”

The ATU Board of Trustees voted in January 2021 to name the Dr. James Collins Agriculture Classroom in recognition of Collins’ financial commitments to support Arkansas Tech and its students through the ATU Foundation.

“As educators, we tend to focus on the future,” said Dr. Mary B. Gunter, chief of staff and distinguished professor of educational leadership at Arkansas Tech, during the dedication ceremony. “We want the best for our students today so that they might develop to become the leaders of tomorrow. As someone who has dedicated his life’s work to horticulture, it is only natural that Dr. Jim Collins would have an astute understanding that what we sow today may not be reaped for many months or years to come.

“That point of view, combined with his affection for Arkansas Tech, has prompted Dr. Collins to make generous provisions in his financial planning that will benefit ATU students into perpetuity,” continued Gunter. “In recognition of his commitment to the future of Arkansas Tech, the university hereby formally dedicates this facility as the Dr. James Collins Agriculture Classroom.”

For Collins, it’s all about paying forward that precious gift from Uncle Lewis.

“All of a sudden I became 66 years old last year,” said Collins. “It dawned on me that I don’t have any kids or grandkids. Upon death there will be a legacy that I leave behind. I hope I’ve left a legacy through teaching and through Miss Tech. I decided I wouldn’t mind to have this additional legacy. It’s pretty neat to have my name on a building. This means a lot to me.” 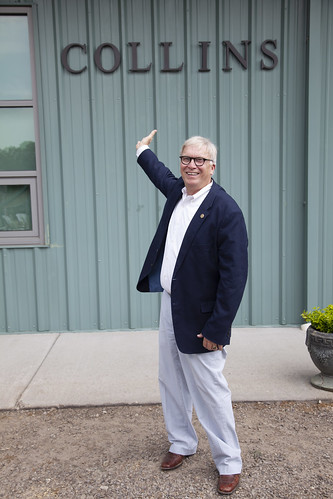