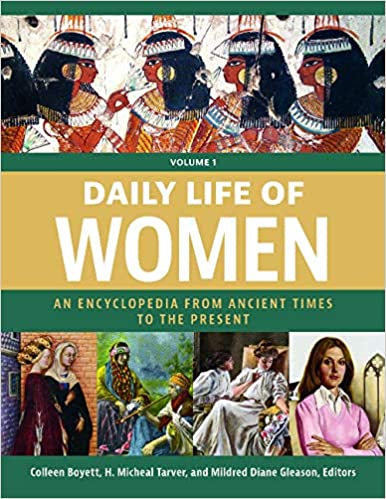 Current and former Arkansas Tech University faculty members as well as ATU students have lent their expertise and scholarly work to a new book.

“Daily Life of Women: An Encyclopedia from Ancient Times to the Present” was published in three volumes by ABC-CLIO in December 2020.

The work is Tarver’s third as editor for an ABC-CLIO project. He previously fulfilled that role for “The Spanish Empire: A Historical Encyclopedia” in 2016 and the “World History Encyclopedia: Era Eight” in 2011.

Tarver is a Fulbright scholar, winner of the 2007 ATU Faculty Award of Excellence in the scholarship category, former head of the ATU Department of History and Political Science and former dean of the ATU College of Arts and Humanities.

Gleason taught at the secondary level for 22 years before serving on the Arkansas Tech Department of History and Political Science faculty for 11 years. She retired from ATU at the rank of associate professor of history in May 2017 and won the Booker Worthen Literary Prize from the Central Arkansas Library System in 2018.

“In addition, a number of graduate students and numerous undergraduates are published in the three volumes in furtherance of our continued support of graduate and undergraduate research,” said Dr. David Blanks, head of the ATU Department of History and Political Science. “We offer Dr. Tarver and our other colleagues and students our heartfelt congratulations.”