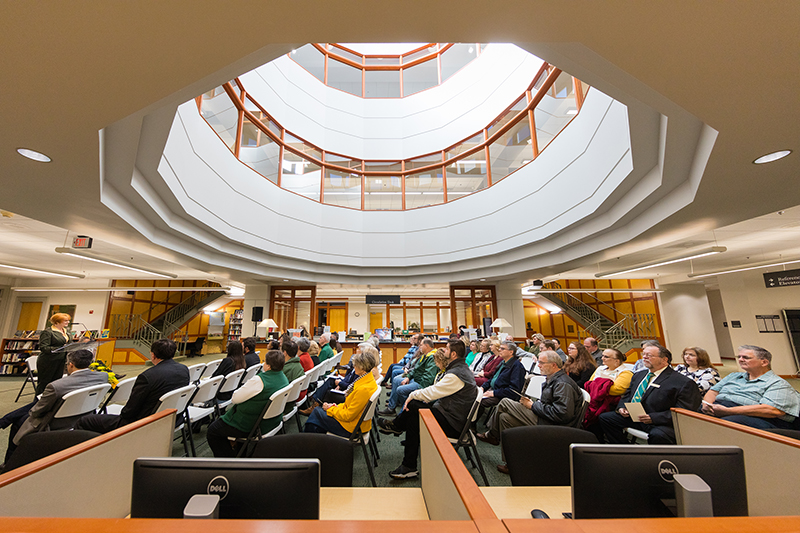 It is difficult to explain how drastically Ross Pendergraft Library and Technology Center has affected student access and success at Arkansas Tech University over the span of the facility’s first 20 years, but one anecdote shared by ATU President Dr. Robin E. Bowen begins to tell the story.

“The predecessor of this facility was Tomlinson Library, which opened in 1936 and continues to serve the university with classroom space and offices for faculty and staff,” said Bowen. “When the library closed at Tomlinson in summer 1999, there was one computer with dial-up internet access. One. It is difficult for some of us, and impossible for the majority of our students, to remember such a world. Today, Pendergraft Library and Technology Center has 332 computers connected to high-speed internet for use by students, faculty, staff and members of the community…and that does not even include the high-speed wireless access that is available here and utilized by those same constituents on their laptops and mobile devices.”

ATU faculty, staff, students, alumni and friends gathered at Pendergraft Library and Technology Center on Saturday, Nov. 16, to celebrate the 20th anniversary of the facility’s dedication.

“Student access is the first step in achieving ATU’s ultimate goal of student success,” said Bowen. “Pendergraft Library and Technology Center has enhanced access to knowledge more so than any other facility, not only at Arkansas Tech, but in this region. This was truly a transformational project when Pendergraft Library and Technology Center opened in 1999, and it continues to be so in 2019.”

Made possible by a $13 million gift from the Donald W. Reynolds Foundation, Pendergraft Library and Technology Center opened in June 1999 and was dedicated on Oct. 30, 1999. It is a three-story, 91,000-square foot facility designed by AMR Architects of Little Rock and built by Van Horn Construction of Russellville.

Dr. Sean McDougal was a member of the ATU Board of Trustees during the planning and construction of Pendergraft Library and Technology Center. He reflected on its impact during the anniversary celebration.

“This library was a tipping point for our campus,” said McDougal. “It led to a cascade of giving by other alumni, we saw additional campus infrastructure constructed and our entire campus landscape changed. One measure of success is if we can leave something better than we found it. I thank Dr. Bowen and our current board members for taking such good care of my beloved alma mater.”

The namesake of the building, Ross Pendergraft, was the youngest of 10 siblings, a native of the Scott County community of Abbott and a graduate of Mansfield High School. He served in the U.S. Navy during World War II and arrived at Arkansas Tech with intentions to earn an associate’s degree in business. He achieved that in 1948.

Pendergraft returned to his western Arkansas roots upon his graduation from Arkansas Tech. He sold advertising for the Southwest Times Record and Southwest American newspapers in Fort Smith. It was the beginning of a 45-year career with what came to be known as Donrey Media Group.

He reached the position of executive vice president and chief operating officer for Donrey in 1990, and one year later his alma mater bestowed upon Pendergraft its greatest honor when he was inducted into the Arkansas Tech Hall of Distinction.

Pendergraft was so admired within Donrey Media Group that when the Donald W. Reynolds Foundation awarded the $13 million grant that made ATU’s new library and technology center possible, the foundation broke from its normal naming policy and allowed the building to be named for him.

U.S. Senator David Pryor of Arkansas once described Pendergraft as “an individual who represents the best in what our state has to offer in the way of an individual, a friend and servant to all humanity.”

Pendergraft passed away in 1998. He lived to see the groundbreaking for the facility that bears his name, but not the completion of the project.

Today, his legacy continues through a library and technology center that serves a university of almost 12,000 students and the surrounding community.

“The ATU Board of Trustees, President Dr. Robert C. Brown, his administration and the remainder of the university community were bold in defining, pursuing and achieving a new horizon upon the opening and dedication of Ross Pendergraft Library and Technology Center,” said Bowen. “Today, it is our responsibility to achieve the next horizon. When we do, we will create a shared legacy similar to the one we celebrate today and ensure the continuous improvement of this very special place known as Arkansas Tech University.” 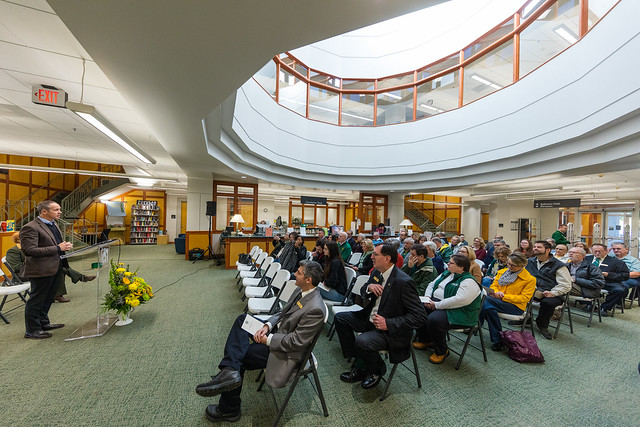