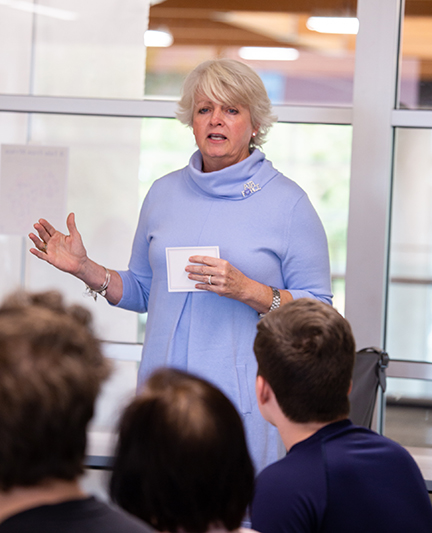 When she returned to her alma mater at the end of the fall 2019 semester and shared some of that accumulated knowledge with a room of ATU students, she put particular emphasis on one point.

“The most important thing in life is to be happy in what you are doing, no matter what that is,” said Hutchins-Frye.

Her remarks were made during a Lunch With a Leader event hosted by the ATU Department of Campus Life. The series brings ATU alumni and community leaders to campus to engage in conversations with ATU students interested in pursuing leadership opportunities.

“I wanted to get to know each and every person I worked with,” said Hutchins-Frye. “If you know your people and go over their goals, you can help them with the skill sets they need to work on. It was important to me to set expectations, but I also think it is important to be very flexible as a leader. We’re much more flexible now than we were when I started my career, and I think it’s a better work force.”

A 1983 graduate of ATU, Hutchins-Frye entered the Air National Guard shortly after completing her bachelor’s degree.

She received her commission in August 1989 through the Academy of Military Science in Knoxville, Tenn. She deployed in 2013 in support of Operation Enduring Freedom as the Chief of Staff, NATO Afghanistan Transformation Task Force, Headquarters International Security Assistance Force in Kabul, Afghanistan.

“Growing up in the country helped me because I grew up in a man’s world,” said Hutchins-Frye, who is a native of Lavaca in western Arkansas. “I spent all of my time in the gym growing up and in (the Hull Physical Education Building) at Tech. Playing racquetball and wanting to beat the guys…or wanting to beat anyone…I just wanted to win. Having that attitude helped me in the military.”

She was subsequently appointed director of manpower, personnel and services in the Air National Guard Readiness Center at Joint Base Andrews (Md.) before retiring from the service in August 2019.

“If you bring in people with different perspectives, it really brings a lot to your organization,” said Hutchins-Frye. “I had the most diverse organization I’ve ever had at Andrews Air Force Base, and that’s what made us great. We all brought different thoughts and ideas. You want people from different perspectives so you get the best product or the best answer you can get. It’s about the values and morals you bring as well as your life experiences.”

“The teachers (at Arkansas Tech) helped guide me and they cared about the students,” said Hutchins-Frye. “As I went forward, those morals and values were reflected in how I wanted to take care of people. I believe in Arkansas and the people of Arkansas. I want to help these kids. They may not get anything out of it, but if I can touch one life and spark some kind of interest that will lead to success and happiness, I want to do that.”

Visit www.atu.edu/leadership_programs/lunchwithaleader.php to learn more about the ATU Department of Campus Life Lunch With a Leader program.