The four artists whose pieces are included in the traveling exhibit currently on display at Arkansas Tech University's Norman Hall Art Gallery spoke about their work during a gallery talk hosted by the ATU Department of Art on Wednesday, Feb. 20.

The show is the Arkansas Women to Watch Series 2019 “Heavy Metal Exhibit Tour.” It was organized for travel by the Arkansas Committee of the National Museum of Women in the Arts (ACNMWA).

Michele Fox, Amanda Heinbockel, Robyn Horn and Holly Laws are the featured artists in the show. They were selected by ACNMWA guest curator Matthew Smith of the Arkansas Arts Center.

Fox indicated during the gallery talk that her pieces in the show are private works of art that have not previously been shared with the public. She explained that art is not something she wants to do. It is something she needs to do.

“It’s obsessive and compulsive,” said Fox. “It allows my mental health to be maintained in the face of all the stuff we deal with every day.”

She went on to tell those in attendance that serving as a medical doctor in oncology is her full-time job.

“Nothing is good at work,” said Fox.

She shared that her professional pursuits have influenced the nature of her art.

“When I started teaching, the idea of doing larger metal pieces was not quite as appealing because of the stress of the job,” said Heinbockel. “I started doing patterns similar to the one in this necklace in watercolor because the immediacy of that was really stress relieving.”

Horn holds a fine art degree from Hendrix College. She was the 2008 recipient of the Arkansas Living Treasure designation from the Arkansas Department of Heritage. Her pieces in the Heavy Metal show were created from found materials.

“Most of this work is pretty recent,” said Horn. “The idea is to make them look like they were something or they did something, but you can’t figure out exactly what it was or how it would work. Mostly, it’s just to get the viewer to look at the piece and contemplate for a while what it might be.”

Laws, associate professor of art at the University of Central Arkansas, holds a Master of Fine Arts degree from the Tyler School of Art at Temple University. Her background includes set dressing, custom fabrication and prop design for the Bread and Puppet Theater in New York City and several motion picture studios.

“A lot of people accuse my work of being really opaque,” said Laws, who integrated antique ironing boards into each of her pieces for the Heavy Metal exhibit. “They look at it and say that 'it looks old, but I don’t understand what it means.' I’m not trying to make works that people can’t figure out. I start from a very visceral level of understanding my own work, and I hope others will approach it in the same way.”

The Women to Watch exhibit program was developed by the National Museum of Women in the Arts (NMWA) to feature underrepresented and emerging women artists from the states and countries in which the museum has outreach committees. NMWA curators select the theme. Local arts professionals curate submissions to the national museum.

The ACNMWA exhibit will be available for viewing weekdays from 8 a.m.-5 p.m. at 203 West Q Street in Russellville through March 8. 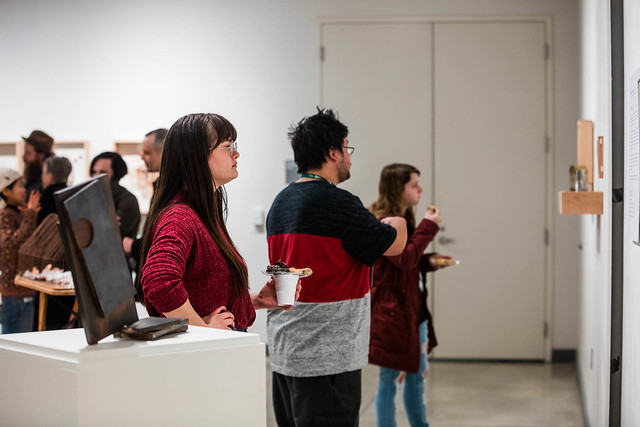