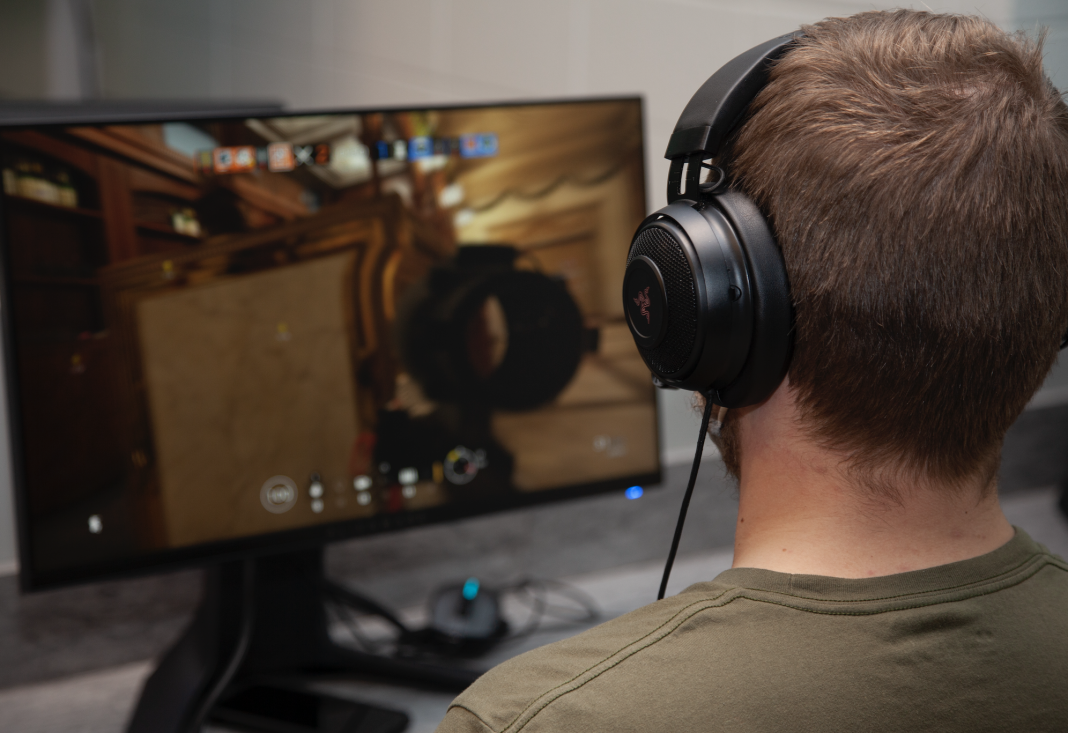 Members of the Arkansas Tech University Esports Club and students who reside in ATU's living and learning community (LLC) for gamers have a new space to call their own.

The ATU Esports lab opened on the first floor of Paine Residence Hall in late January. It is available for ATU Esports Club members and residents of the gaming LLC to utilize during team practices and matches.

"Instead of being in separate rooms or separate houses, we're together and can react when someone does something good," said ATU student Ryan Kramer. "We can lean over and give our teammates a pat on the back and tell them good play. It gives us a chance to communicate and really get to know each other more so than if we were just playing online. That has been a major benefit."

Arkansas Tech students represent the ATU Esports Club on 11 teams that compete against gamers from other universities and colleges.

"I was never a very competitive person in general, so it's been a weird thing for me to start doing Esports competitions," said ATU senior James Vance of Sheridan. "It's a lot of fun. It is draining because you don't want to let the rest of your team down. It can be nerve racking, but once you get used to it, it's a lot of fun. It's more about the getting to play part of it. I don't mind to lose that much, but we seem to care a lot more when we are competing against other teams from Arkansas."

Vance said that he arrived at Arkansas Tech with a circle of friends that quickly grew as a result of a shared passion for Overwatch.

"It's really nice to be able to have a space now to create friends and relationships with people who share a similar hobby," said Vance, an information technology major who was among the founders of the ATU ESports Club in 2017. "I like seeing people who might not have otherwise interacted have the opportunity to become friends because of a platform like this."

It was different for Kramer. He is from Blue Springs, Mo., and knew no one at Arkansas Tech when he began his studies there in fall 2019.

"The Esports Club and the friends I've made there were my way of getting out there when I came to college," said Kramer. "The shared interest of gaming allowed me to make some friends immediately. The Esports Club is a great way to meet people if you are new to Arkansas Tech."

Now, Kramer is a sophomore majoring in cybersecurity and provides leadership for the gaming LLC in Paine Residence Hall.

It is the latest boost to a gaming culture at Arkansas Tech that includes a Bachelor of Fine Arts degree in game and interactive media design, which debuted in 2016.

As Vance prepares to graduate, he can look back with satisfaction on the gaming community he helped bring together at ATU and the new opportunities that community will have moving forward.

"In my personal experience, I've noticed a lot of people who come to the club who are very introverted," said Vance. "I've seen some of them come out of their shell as a result of the club. However, I think the stereotype of gamers being introverted is a little bit overplayed. There are a variety of people in our community. Having the room at Paine Hall will force folks to talk to each other, and I'm interested to see how that turns out."

Learn more about the Arkansas Tech Esports Club at https://atu.presence.io/organization/arkansas-tech-esports.

Learn more about the ATU gaming LLC at www.atu.edu/reslife/llcs/llc-gaming.php.