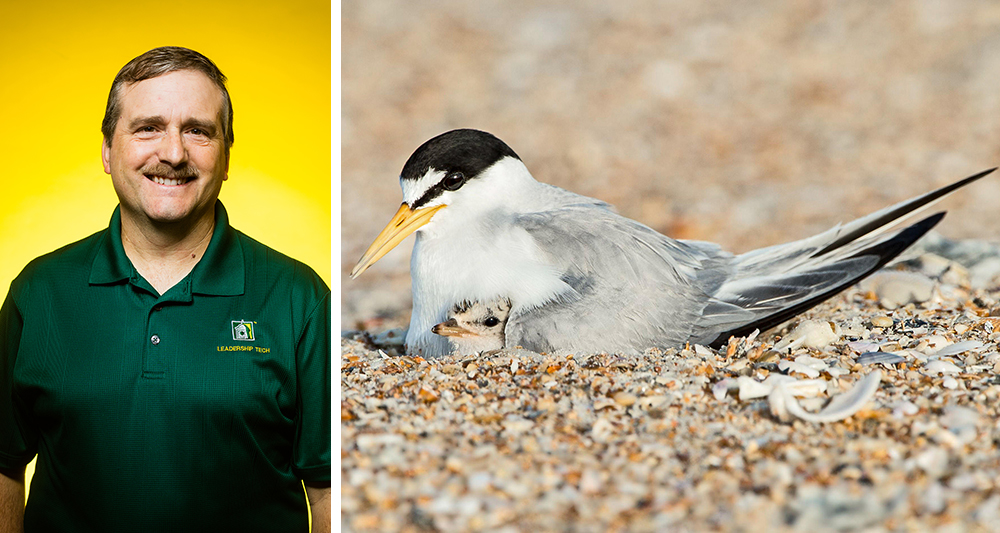 Image of Dr. Tom Nupp and the Interior Least Tern

A nearly two-decade effort to support the interior least tern bird population by Arkansas Tech University faculty member Dr. Tom Nupp and his students has helped the species return from the brink of extinction.

Nupp and his team of students have routinely studied Arkansas River sites ranging from Alma in west central Arkansas to Pendleton in southeast Arkansas since 2001.

That was when Nupp successfully applied for a grant from the Arkansas Game and Fish Commission to study the interior least tern, which the U.S. Fish and Wildlife Service declared as an endangered species in May 1985.

“I was interested in least terns from a biological standpoint because I am interested in GIS (geographic information systems) and spatial arrangements of wildlife populations,” said Nupp. “Terns are particularly interesting because they nest on sand and gravel bars scattered on the Arkansas River, and those sand and gravel bars may not be the same every year, so they move around.”

Following the construction of navigation systems on interior waterways such as the Arkansas River during the 20th century, the more consistent river flow prevented many of the periodic high water and low water fluctuations that create the least tern’s nesting habitat. As a result, the population of the interior least tern began to decrease.

Over the span of the 18-year grant project, Nupp and his ATU students have provided the U.S. Fish and Wildlife Service and the U.S. Army Corps of Engineers with regularly updated estimates of the adult least tern population on the Arkansas River and that population’s reproductive output.

“The application of the knowledge we have gained over the years to habitat management is what has really made the difference,” said Nupp. “I feel proud to have been a part of that. Many of the things we see as regular practice now from the U.S. Army Corps of Engineers are suggestions that were made in reports by former students and myself. We’ve had an impact on the actual management along the Arkansas River.”

The U.S. Fish and Wildlife Service has been accumulating data on the least tern along other interior rivers, and as result of the collaboration between biologists and government entities, the number of documented least tern colonies has increased from 48 to 480 since 1985.

“One of the more incredible things when you go out and observe least terns is how acrobatic they are in their flight,” said Nupp. “When they are fishing, they will fly and practically hover over the water before they dive in. If you visit one of their nesting colonies, you will hear them, loudly, and they will occasionally dive bomb you. They make their presence known.”

The estimated population of the interior least tern now tops 18,000, which prompted the U.S. Fish and Wildlife Service in October to recommend its removal from the endangered species list.

According to the U.S. Fish and Wildlife Service, more than 30 groups have been involved in interior least tern monitoring during the span of the conservation effort.

“This has been enormously successful for our (ATU) students,” said Nupp. “I have a whole list of students who have completed master’s theses on least terns, their biology and their management. In addition, we’ve been able to hire numerous student workers to work on the project during the summer months. I’ve had former students come back years later and talk about how they still remember that summer they spent on the Arkansas River. Some of my former students are now working for the U.S. Fish and Wildlife Service and the U.S. Army Corps of Engineers. This has been a successful aspect of their education and has provided some really good job opportunities for them.”

Nupp said that ensuring continued funding for interior least tern monitoring once the bird comes off the endangered species list will be the next challenge in the project.

“It’s tricky because we (humans) created the situation that led to the birds becoming endangered, and we’ve done some specific management actions to try to recover the population, so in some respects we’re responsible for the bird,” said Nupp. “If we just throw our hands up and say ‘it’s all over,’ (interior least terns) will likely be back in the same situation.”

Learn more about the ATU fisheries and wildlife science program at www.atu.edu/biosciences/fishwildlife.

ATU Board Elects Kennedy as Chairman for 2020