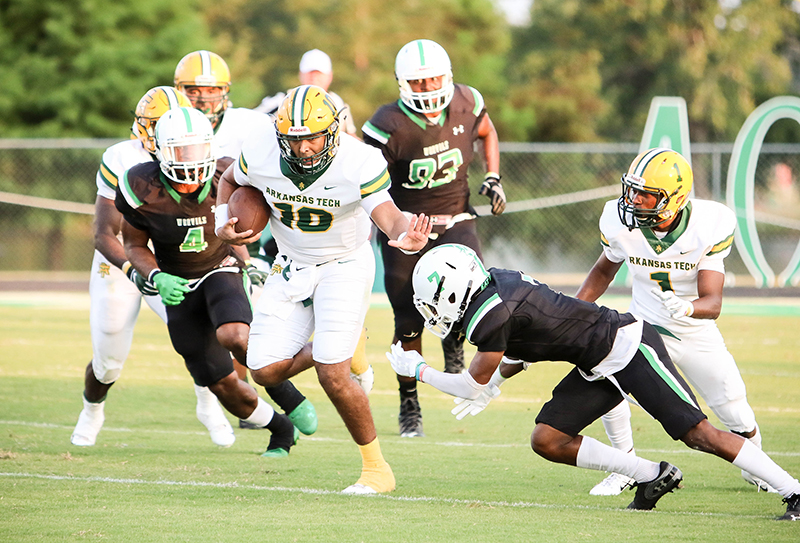 It was the philosopher Ric Flair who once observed that if one wishes to be “The Man,” one must first defeat “The Man.”

Well, as it relates to Great American Conference football, “The Man” is planning a visit to Thone Stadium at Buerkle Field in Russellville on Saturday, Sept. 14.

“The biggest thing is playing hard, playing fast, trusting ourselves and believing that we can beat a top 10 team,” said Kyle Shipp, ATU head coach. “That’s the one thing we’ve talked about all week. We 100 percent believe that if we do things right, we can win this football game. It’s a belief, and it’s a mindset.”

OBU is bidding to become the first program to win three consecutive GAC football championships. The Tigers took a big first step in their pursuit of the 2019 title when they fended off perennial challenger Harding University 16-14 in the season opener for both sides Sept. 5 in Arkadelphia.

Ouachita freshman kicker Gabe Goodman connected on a 38-yard field goal with just over a minute to play to give the Tigers their 13th consecutive win in a season opener. With the victory, OBU improved to 22-4 overall since the beginning of the 2017 season.

“They have a great head coach,” said Shipp when asked what has fueled the Tigers’ consistency. “Todd Knight is the best head coach in our conference, in my opinion. He’s been doing it for more than 20 years, so he’s been allowed to get his formula down and they execute it week in, week out. They are not a team that is going to beat themselves very often. They are a power football team on both sides, and we have to show up and prove that we can play that style of football for four quarters. I think our kids are up to the challenge, but it’s going to be a huge test.”

Like Ouachita, Arkansas Tech’s 2019 season opener came down to a field goal. Josh Marini’s successful 23-yard attempt in overtime gave the University of Arkansas-Monticello a 26-23 win over the Wonder Boys Sept. 5 in Monticello.

If one statistic told the tale, it was third-down conversions. UA-Monticello moved the chains on eight of its 19 third downs. ATU was 1-of-14 on third down.

“A lot of it was what happened on first and second down,” said Shipp. “We put ourselves in some situations due to a penalty, a missed block, a misread by the running back or a missed throw by the quarterback. There were several little things, and a lot of them happened in the second half. That comes back to conditioning and lack of execution. We’ve worked on that this week, and hopefully it will show up (against OBU).”

Another positive was the performance by sophomore place kicker Jesus Zizumbo. He was 3-for-3 on field goal attempts, including a 47-yard kick in the fourth quarter that ultimately forced overtime. It tied for the seventh-longest successful field goal attempt in ATU history.

Arkansas Tech is 44-32-7 all-time against Ouachita Baptist. The Tigers won last year’s meeting 24-7 in Arkadelphia to improve to 6-2 in their last eight meetings with the Wonder Boys.

Party at the Plaza tailgating will begin at 3 p.m. Saturday just north of the stadium on the Crabaugh Hall lawn.

Game tickets ($10 adults/$5 students and senior citizens) will be available at the stadium ticket office during Party at the Plaza. ATU students, faculty, staff and the immediate family of employees will be admitted free of charge upon the presentation of a valid Arkansas Tech identification card.