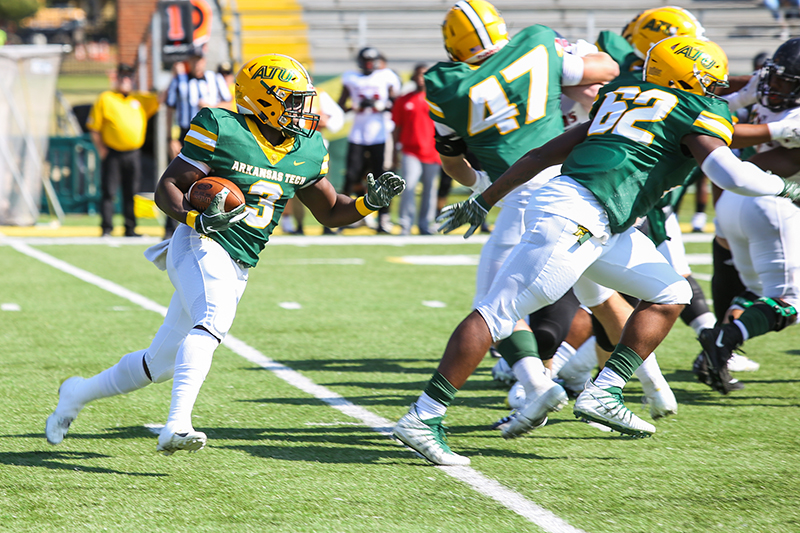 There’s no way, not even on the hottest day of the year, that a bucket filled with 35 degree water could have felt better to Kyle Shipp than it did when his Arkansas Tech University football players poured one over his head last Saturday evening at Thone Stadium at Buerkle Field.

“It’s a big relief to have that first win, especially for the kids and from a program standpoint,” said ATU’s head coach while reflecting on a 21-14 victory over Northwestern Oklahoma State University. “They’ve been working so hard, and for those guys to have that feeling and enjoy it…there’s nothing like it. There were times when we could have folded again, but we kept fighting and had each other’s backs.”

The Wonder Boys (1-6) will try to make it two wins in a row when they visit Southwestern Oklahoma State University (2-5) for a 5:30 p.m. Great American Conference contest at Milam Stadium in Weatherford, Okla., on Saturday, Oct. 26.

SWOSU quarterback Tyler Marr will enter the game third in the GAC in passing (213.9 yards per game) and total offense (240.3 yards per game). His favorite target is wide receiver Jared Rayburn, who ranks fourth in the conference in receiving yards (76.8 per game).

ATU defensive lineman Tre Chism hopes to disrupt that combination by continuing to make plays behind the line of scrimmage. Chism leads the GAC in quarterback sacks (4.5) and tackles for a loss (9.5) in 2019. He is the reigning GAC defensive player of the week after he tied the Arkansas Tech record for sacks in a game (3) last week.

“(Chism) is finishing things now,” said Shipp. “He’s always had the ability. Tre wasn’t with us in the spring. He had been let go, and he came to me and wanted to come back. We have a weekly conversation about how to grow up, how to be a man and learning what a good teammate is supposed to be. He has gotten so much better, and you could see it on his face Saturday. It clicked for him. He is caring more about his team than himself, and when you do that, a lot of times your individual performances go up.”

Including SWOSU, the Wonder Boys’ next three opponents have a combined overall record of 4-17. That favorable stretch in the schedule, combined with Arkansas Tech’s continued improvement, could lead to a late-season resurgence for ATU.