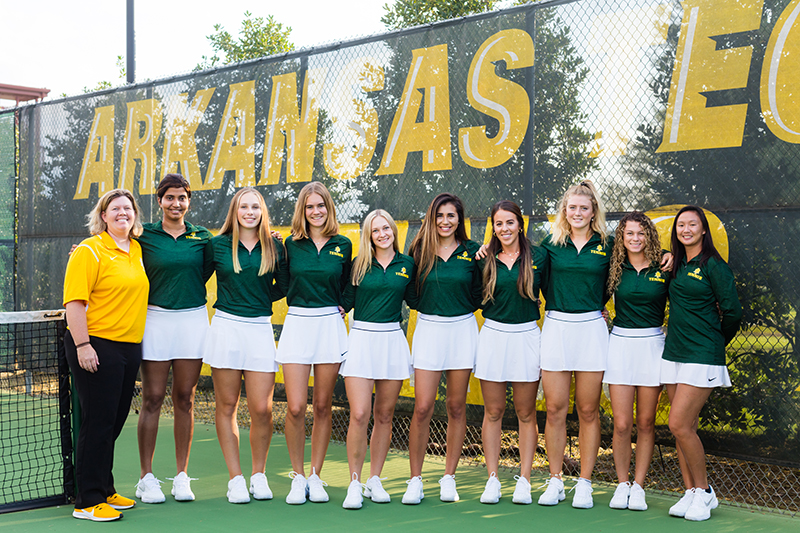 It’s a requirement when serves are hurtling toward you at speeds similar to cars on the interstate.

The Golden Suns’ sense of timing also applies to their community service endeavors, and that’s a very good thing for children in Russellville.

A Go Fund Me campaign that ATU senior tennis team member Kami Ward started earlier this spring came to fruition just in time for her and her Golden Suns tennis teammates to deliver more than $330 worth of food to children at Oakland Heights Elementary School in Russellville before Arkansas K-12 schools were closed due to the COVID-19 pandemic.

“When I posted (the Go Fund Me) to my Facebook page, the goal amount was reached within a week,” said Ward. “I was super surprised how quickly people donated, but I was happy people cared. My team and I went to Walmart and we bought a ton of canned goods, toaster pastries, mac and cheese packages, crackers and fruit cups. When I unloaded the groceries at the school, I walked past several kids, and I overheard one say, ‘Whoa, I get Pop-Tarts and mac and cheese!’ I knew the excitement of this one child would be the same for several others.”

Excitement was soon replaced by uncertainty as the need for social distancing forced the suspension of life as normal. For the Golden Suns, the cancellations included the remainder of their 2020 tennis season. They decided to schedule hunger as their final opponent of the year.

“Whenever my team and I found out our season was cancelled and school would be online, it was the day before we were scheduled to pack food backpacks at Oakland Heights,” said Ward. “Since the pandemic affected us, we knew it would also affect the elementary school. So, we decided to all do backpacks one last time. We packed the backpacks full of food in case their school shut down.”

It did, and the food and time invested by the ATU tennis players helped ensure the elementary students had access to nutritious, easy-to-prepare food while isolated at home.

“Seeing the Go Fund Me project be as successful as it was and be achieved at the exact right time has been so satisfying,” said Ward. “It has definitely filled a void of tennis. Volunteering is just a part of the Tech culture, and knowing that culture lives on through the people that benefit from it reminds me of how great of a team I am a part of. It means so much that kids are benefiting from the goods we received.

“I am so happy that Tech athletics put me in a culture where we’ve helped people since my freshman year,” continued Ward. “Four years of constant community service have given me so much knowledge and new instincts. So, whenever I saw that these kids did not have enough food, it was instinct to help because this is what I am used to doing. Tech athletics has taught me the importance of acting instead of being a bystander. I’ll be forever grateful for that.”