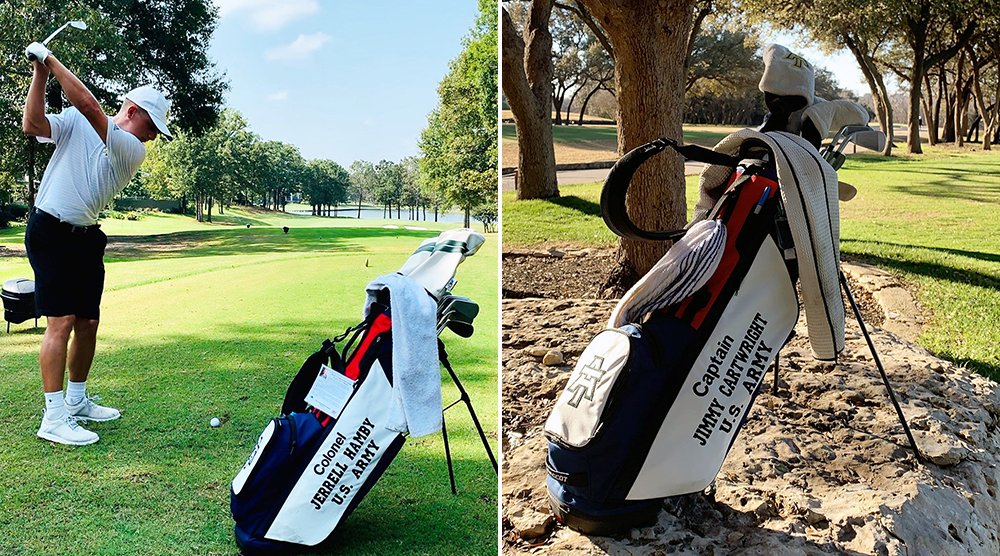 Standing over a tee shot with out of bounds down the left and water to the right. Making the decision to go for a par-5 green in two shots. Knowing a 3-foot putt is for the win.

Within the context of golf, it might seem as though these moments require courage.

Members of the Arkansas Tech University men’s golf team know better. They carry with them a reminder of what courage is at every tournament.

Folds of Honor is a scholarship program for spouses and children of fallen and disabled American service members. It was founded in 2007 by Major Dan Rooney of the Oklahoma Air National Guard.

ATU head golf coach Luke Calcatera learned of the program through the Golf Coaches Association of America and registered the Wonder Boys for the Folds of Honor Military Tribute Program. The team has one customized golf bag per season that honors a fallen military service member.

Hamby earned the Silver Star for his valor during combat operations in Vietnam on April 29, 1970. He died as a result of injuries suffered in a vehicle accident at the Fort Irwin National Training Center (Calif.) in 1985.

This year, the Wonder Boys are playing in memory of Capt. Jimmy Cartwright.

Cartwright’s name is displayed on the side of a patriotic-themed golf bag that one Wonder Boy is carrying during each of the team’s tournaments during the 2021 season.

“When a player has a good week and has done well academically, performed at practice and been a leader, he gets to carry the bag for the next tournament,” said Calcatera. “Then it switches to different players throughout the year. Parents and players from other teams see it and ask about it, so it brings recognition to the cause and to Captain Cartwright. We’ve seen some other teams start to participate in the program as well.”

The bag will be auctioned at the end of the season with all proceeds going to the Folds of Honor organization.

Calcatera added the duties of head women’s golf coach at Arkansas Tech this year, and he plans on expanding the program to include the Golden Suns during the 2021-22 season.

“It helps our student-athletes have more appreciation for our veterans,” said Calcatera. “I have learned a lot about the contributions that Arkansas Tech alumni have made to our armed services through the efforts of our ATU Office of Veteran Services. I don’t have a personal military connection within my family, but there’s always been that appreciation for our veterans. It’s important that I and our student-athletes show support for organizations such as Folds of Honor and the families they serve.”

To inquire about bidding on the ATU Folds of Honor golf bag at the completion of the season, call (479) 857-9824 or send e-mail to lcalcatera@atu.edu.