Following a more than three-year journey that included a fire while the building was undergoing renovations, Arkansas Tech University’s Williamson Hall is back.

ATU re-dedicated the historic structure on Thursday, March 3, in memory of Marvin Williamson and in honor of the perseverance of the students, faculty and staff who call it home.

“Stories, descriptions and roots matter,” said Andrea Lea, ATU alumna, auditor for the State of Arkansas and keynote speaker for the re-dedication. “All of us have them. As Williamson Hall is re-dedicated today, let’s remember those stories, the students and the faculty of its past, its present and its future. May God bless this building and all who use it. May their lives lead to the service of others for the well-being of all.”

Williamson Hall is home to classrooms, laboratory spaces and offices utilized by ATU’s programs in recreation and park administration and hospitality administration.

Opened in 1940 as the home of the National Youth Administration (NYA) headquarters for Arkansas, the building that came to be known as Williamson Hall reverted to ATU ownership after the NYA was discontinued in 1943.

Arkansas Tech students from the 1940s through the early 1970s knew the building as the home of the fine arts program. Marvin Williamson, namesake of the facility and the first band director in Tech history, taught there, as did his successor, Gene Witherspoon.

The studios for radio station KXRJ, which later became KARV, were located in Williamson Hall from the time it went on the air in February 1947 until 1957.

U.S. Army ROTC students trained inside Williamson Hall. One of Tech’s most decorated ROTC alumni is Major General William Wofford, who returned to the front lawn of Williamson Hall as adjutant general of the Arkansas National Guard on Oct. 26, 2013, to help re-introduce the tradition of Jerry the Bulldog to Arkansas Tech following a 76-year absence.

Williamson Hall was named to the National Register of Historic Places on Sept. 8, 1992, and was in the midst of a major renovation project when it caught fire shortly after 4 p.m. on April 3, 2019.

Insurance reviews of the fire damage concluded on July 30, 2019. The ATU Board of Trustees voted on Jan. 16, 2020, to move forward with a historic preservation project to restore Williamson Hall and return it to service as an academic building.

More than three-and-a-half years after they first moved out of the building, faculty and staff returned to Williamson Hall in December 2021. Classes are being conducted in Williamson Hall during the spring 2022 semester.

“Ecstatic…that’s the only term I can come up with,” said Dr. Cathi McMahan, ATU professor of recreation and park administration, when describing what it is like to walk the hallways of Williamson Hall again. “I couldn’t wait to hear those student footsteps again. Williamson Hall is special. I don’t know any other way to say it. It’s hard to describe the place in our heart that Williamson Hall holds. To share this moment with all of you today is something we’ll never forget.” 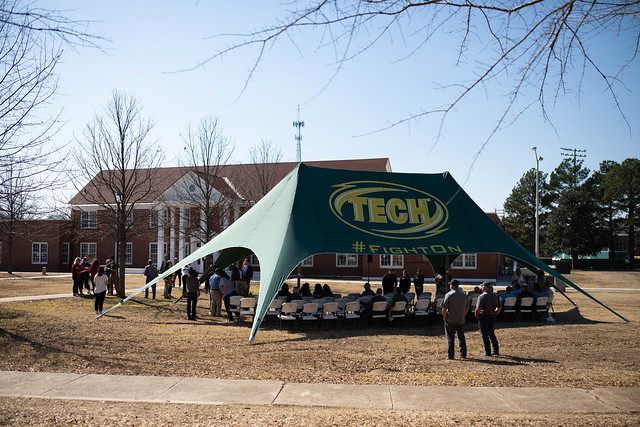