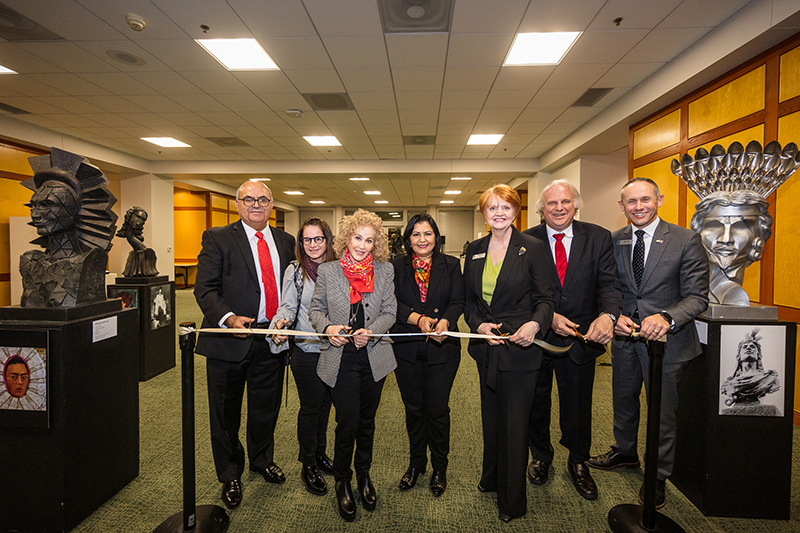 Gregorio Luke is more than the curator of “José Sacal: A Universal Mexican,” an art exhibit currently on display at Arkansas Tech University.

Luke was Sacal’s friend, and he made a special trip to Russellville on Tuesday, Nov. 12, to share memories of the sculptor during the opening of the Sacal exhibit at Ross Pendergraft Library and Technology Center.

“Sacal was a true artist,” said Luke. “Not only because of his success, and not only because his works are featured in more than 40 public plazas all over the world. There are countless exhibits and books about his work. But what I mean by a true artist is someone who was true to himself as an artist. So many times we look at artists who have found success, achieved critical recognition and are known for a type of work…and they spend the rest of their careers recreating that type of work…because it sells and because it’s comfortable. They become manufacturers of their own first creativity. Not Sacal. He was always evolving. He was always experimenting. He was always trying new things.”

The show is made possible through a partnership between Arkansas Tech University, the Consulate of Mexico in Little Rock and the José Sacal Micha Foundation. Admission to the exhibit will be free and open to the public during Pendergraft Library regular hours through Feb. 28, 2020.

“Culture and art are two of the most powerful driving forces of Mexico,” said Rodolfo Quilantan Arenas, consul of Mexico. “They are what really distinguish Mexico and Mexicans. From today through the end of February, Mexican culture and art will be represented here at ATU with the most universal Mexican sculpturist, José Sacal. Sacal’s artwork has inspired thousands of artists and museum visitors around the world. His creativity, innovation and imagination have no limits.”

Born in 1944 in Cuernavaca, capital of the state of Morelos in Mexico, Sacal studied at La Esmeralda art school in Mexico City with Francisco Zuniga and Arthur Kronohnengold. His work has been featured in more than 40 individual exhibitions and dozens of collaborations in Mexico and around the world.

In 2006, Sacal became the first Mexican to have his sculpture art permanently displayed in China. Sacal sculptures can be found in public spaces across Mexico, Israel and the United States. Sacal died in October 2018.

Prior to its arrival at ATU, the “José Sacal: A Universal Mexican” exhibit was on display at the Mexican Cultural Institute in Washington, D.C., and the Clinton Presidential Library in Little Rock.

“Over the course of the past five years, Arkansas Tech University has collaborated with the Consulate of Mexico in Little Rock to extend educational opportunities…opportunities that would have been out of reach absent our partnership,” said Dr. Robin E. Bowen, ATU president. “This exhibit is another way we are working together to improve cultural awareness…promote diversity and inclusion… and expose our students to thought-provoking expression.”

Bowen went on to note that the Sacal exhibit is part of a landmark academic year in the arts at ATU.

A new musical written by ATU faculty members Dr. David Eshelman and Dr. Timothy Smith, “A Taste of Buffalo,” debuted on campus in October and has been entered into the Kennedy Center American College Theater Festival for award consideration.

The ATU Choral Artists performed at the National Collegiate Choral Organization Conference in College Park, Md., Nov. 7-9. Arkansas Tech was one of just nine institutions in the U.S. selected for that honor this year.

In May 2020, the ATU Symphonic Wind Ensemble and the ATU Choral Artists will perform at the world-famous Carnegie Hall in New York City as part of an exclusive, three-hour concert.

“These are just a few examples of excellence in the arts at Arkansas Tech University,” said Bowen. “It is our privilege to count this exhibit of work by the legendary José Sacal as part of this amazing year in the arts for our university. On behalf of Arkansas Tech University, I say thank you, or gracias, to our friends at the Consulate of Mexico in Little Rock and the José Sacal Micha Foundation. Your partnership in this endeavor is a treasured gift to our students, our faculty, our staff and our community.” 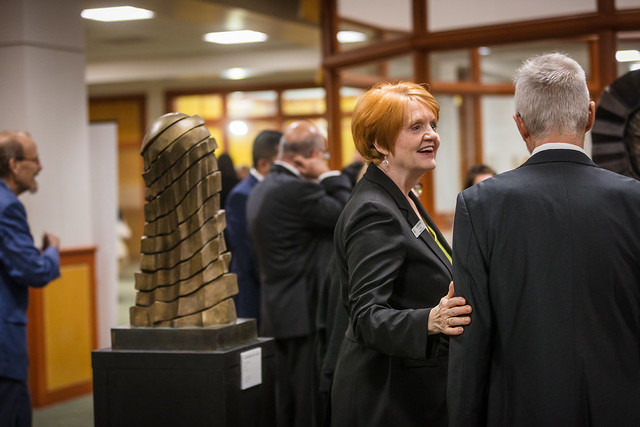