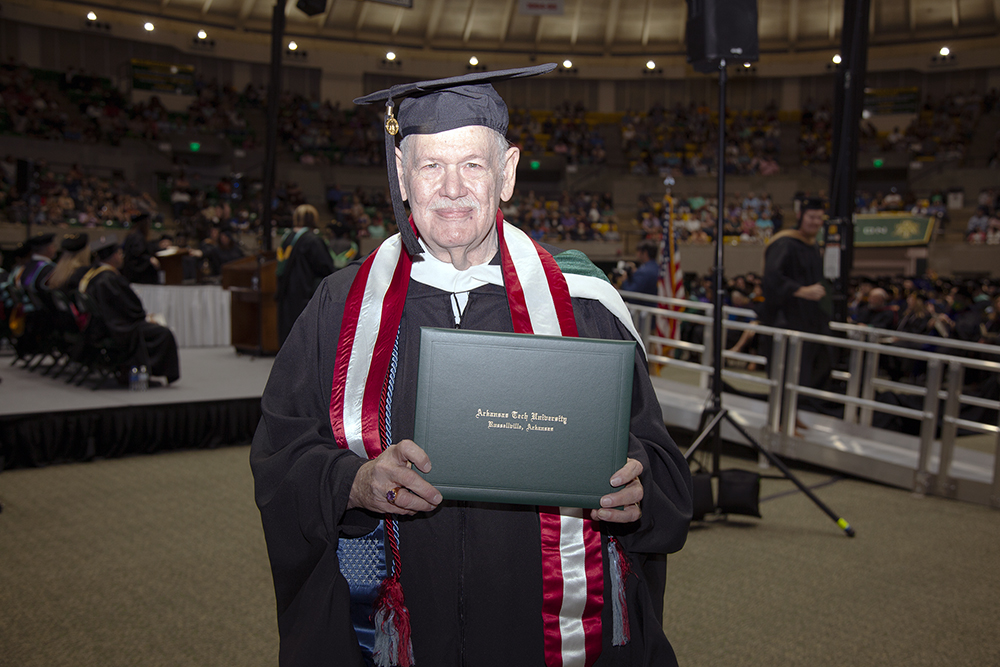 A quick survey of the faces beneath the mortarboard caps indicated he’s probably enjoyed the longest life of all the individuals who graduated from Arkansas Tech University at the conclusion of the spring 2022 semester.

He definitely had the longest name.

But beyond those two distinctions, 71-year old Leonard Thomas Stonewall Jackson Caleb Chilson — Leo, to his friends — was just like many of his fellow graduates…proud of his achievements, grateful for those who helped him reach them and optimistic about the future.

“It was free at my age, so I took advantage of it,” said Chilson. “I love history and (ATU) has a good program, so I did my undergraduate here and decided to go for the master’s.”

“There’s always something more out there to know,” said Chilson. “There’s so much history and there are so many different parts of history that I like. You have professors here who can guide you and help. I had all good ones and good classmates while I was here.”

Chilson named Dr. Peter Dykema, Dr. Micheal Tarver, Dr. Gregory Michna and Dr. David Blanks as some of the ATU faculty members who have been influential in his academic success.

A resident of Pyatt, Chilson conducted the majority of his classes at Arkansas Tech through a combination of online classes and independent study. He said learning more about American history, particularly the stories of Native American tribes such as the Cheyenne, the Sioux and the Kiowa, was his favorite subject.

His degrees from Arkansas Tech were not Chilson’s first experience with higher education. He obtained a Bachelor of Science degree in hotel management from the University of Nevada at Las Vegas in 1993. His career in that field included working on the team that opened the Luxor Hotel and Casino in Las Vegas.

Writing, history and learning are Chilson’s passions these days. He has authored 11 historical novels set in eras as varied as the American Revolution, the Civil War and World War II.

He is currently studying for the Graduate Record Examination test — more commonly known as the GRE — so he can pursue further postgraduate courses.

Regardless of age, Chilson encourages others to do the same.

“I say do it,” said Chilson. “If you’re over 60, the State of Arkansas pays for it. It just costs you your books. You have good professors who work with you and guide you. If you want to learn something more, (Arkansas Tech) is the place to do it. Don’t be afraid to take that step. It’s really worth it.”