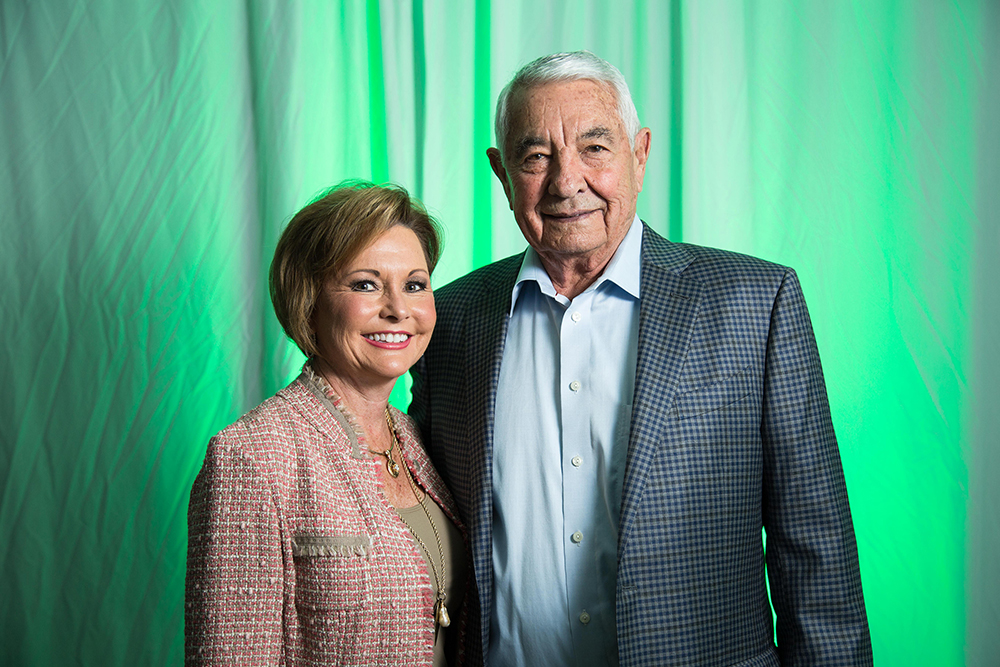 Image of Laurie and James Bibler

Laurie and James Bibler of Russellville have pledged $6 million to the Arkansas Tech University Foundation in the form of an estate gift.

Their commitment represents the largest personal gift pledge in the 111-year history of Arkansas Tech University.

“It gives us great pleasure to be able to offer scholarships to young adults who have a desire to further their education but do not have the means to do so,” said Laurie. “James and I realize that education is so important to young adults. If they are not given the opportunity for post-secondary study they risk being left behind. We don’t want that to happen. We want them to succeed and achieve their goals.

“We also want to encourage others to give in support of Arkansas Tech,” continued Laurie. “If we can provide a college education for even just one person and that person goes out and succeeds to their fullest, think about the impact that they will make. It is important to give back from what we have been given. We hope that others are inspired to include Arkansas Tech in their estate plans.”

The Biblers’ gift will be designated to two funds within the ATU Foundation --- the James and Laurie Bibler Scholarship fund and the University’s Greatest Need fund.

“The pledge that Laurie and James Bibler have made in support of Arkansas Tech University will positively influence the trajectory of our students’ lives for generations to come,” said Dr. Robin E. Bowen, ATU president. “There are no words to express how deeply and sincerely we appreciate the Biblers’ generosity and their support of our mission of student access and student success.”

James studied business administration at Arkansas Tech for two years before going to work for his father, Odus Bibler, in 1955. Odus was a farmer and the owner of a lumber business that was founded by his father, David Albert Bibler, in 1909.

After starting in that business as a lumber stacker, James rose through the ranks of the company to become president at the age of 33 in 1967.

Following a significant modernization of the company and its equipment from 1986-98, James sold 90 percent of the company to Freeman Brothers, Inc., in 1998. West Fraser Company of Canada subsequently bought the business in 2014.

James has served as chairman of the Ouachita Timber Purchasers Group and as a member of the Southern Pine Inspection Bureau Board of Directors.

He is a past chairman of the Arkansas Forestry Commission, having been appointed to that board by Gov. David Pryor and re-appointed by Gov. Bill Clinton.

Arkansas Tech has benefited from James’ expertise through his service on the ATU College of Business Advisory Board. His work in that capacity helped the institution’s accounting program gain its accreditation.

In 2011, ATU bestowed its highest honor upon James when he was inducted into the Arkansas Tech Hall of Distinction.

“I used to go to these national board meetings for the forestry industry,” said James. “I’d be sitting around a table with people who graduated from Harvard or Yale, and they’d ask me where I went to school. I told them I went to Arkansas Tech for two years, and then I went to the school of hard knocks.”

The Biblers have been married since 1984. Laurie worked in the family lumber business in the roles of vice president/secretary and chief financial officer.

“We were a family, and we were a team,” said Laurie when asked what made Bibler Brothers successful. “My husband made it a point to get to know all of his employees and never ask anyone to do a job he wouldn’t do. He respected everyone equally.”

A native of North Little Rock, Laurie studied at the University of Arkansas at Fayetteville following high school. She earned a two-year degree there and went to work at First American National Bank, where she rose to the rank of administrative assistant/officer of the executive department and secretary of the board of directors.

She later enrolled at Arkansas Tech as part of her preparation to become a real estate broker. Laurie has remained involved with the university as a long-time officer for the ATU Foundation Board of Directors.

“Arkansas Tech is important to me because it has played a major role in the Bibler family,” said Laurie. “Beyond that, Arkansas Tech is a vital part of Pope County. I live in this wonderful community, and we need to support Arkansas Tech. My desire to help Arkansas Tech has grown through the years. I consider it a privilege and honor to serve on the foundation board.”

The Biblers’ previous financial support of Arkansas Tech includes a gift that helped make the construction of Hindsman Tower possible.

“The story of Laurie and James Bibler is one of personal success paired with a passion for helping others,” said Jason Geiken, ATU vice president for advancement. “The pledge that they have made to the ATU Foundation is an expression of their affection for Arkansas Tech and their confidence that these resources will be well invested in providing for the educational needs of ATU students. On behalf of those students, we express our profound gratitude and appreciation to Laurie and James.”

Governor’s School Remains at ATU Through 2024