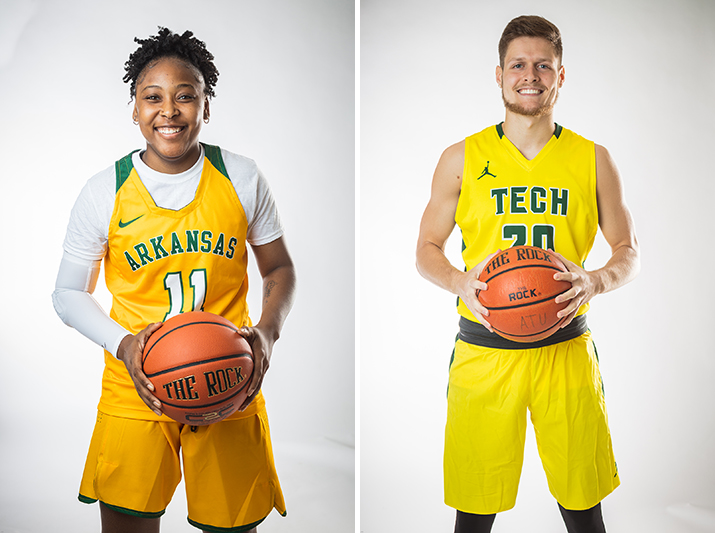 Rarely, if ever, has the University of Arkansas-Monticello sent a more accomplished pair of basketball teams to Tucker Coliseum in Russellville for a conference doubleheader.

Arkansas Tech University will host UAM squads that have a combined overall record of 14-1 and are undefeated in Great American Conference action on Saturday, Dec. 7.

About the Cotton Blossoms: UA-Monticello is 7-0 for the first time since 1976-77. That group of Cotton Blossoms won their first 16 games before suffering a loss. Greg Long is in his first season as the head women’s basketball coach at UAM. He was previously an assistant coach at the University of Central Arkansas and Delta State University under head coach Sandra Rushing. The Cotton Blossoms lead the GAC in scoring defense (45.3 points allowed per game) and field goal percentage defense (.310). Senior guard Berniezha Tidwell (17 points per game) is UAM’s leading scorer.

About the Wonder Boys: Arkansas Tech junior guard R.J. Glasper is displaying the form that made him the first freshman to earn All-GAC first team honors when he achieved that distinction in 2017-18. The Forrest City product is averaging 17.5 points and 6.7 assists per game. He is shooting 45 percent from 3-point range, up from 35 percent two years ago and 29 percent last season. Freshman guard Dillon Gooding (15 points per game) and senior forwards Ramses Sandifer (12.3 points per game) and Devante Foster (12 points per game) are also among the Wonder Boys’ leading scorers.

About the Boll Weevils: UA-Monticello has won seven consecutive games, its longest such streak in men’s basketball since it won 14 straight contests to begin the 2016-17 season. The Boll Weevils swept the season series from Arkansas Tech in 2018-19, defeating the Wonder Boys 75-72 in Monticello and 88-69 in Russellville. UAM has won four of the last five meetings between the two programs. Six Boll Weevils are averaging double figures in scoring, led by senior guard Marcus Gilbert (16.8 points per game).