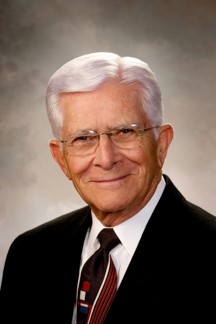 ATU-Ozark’s Veteran’s Day program and luncheon is November 11, 2019, at 11:30 a.m. in Student Services Conference Center room 117. All students, faculty, and staff are encouraged to attend the program and the luncheon.
Jock Davis, an ATU Alum, will be the keynote speaker.
Jock Davis was born into a military family. His father served in World War I, and his family has served in every war since.
After graduating from Malvern High School, Jock Davis entered the United States Army in 1943. Mr. Davis served in World War II with combat engineers in New Guinea and the Philippines.
In 1946 he was honorably discharged with a Meritorious Service award. He began his educational journey at Arkansas Tech University in February 1946. He met his wife of seventy-one years, Melba, at ATU.
He graduated with an Associate’s Degree in 1948 and completed a degree in Business Administration in 1950.
Immediately after graduation, the army called on Jock to serve during the Korean War for the next three years.
Jock applied his business degree for the next fifty years. He worked for Valmac Industries, Inc. recruiting students from land grant colleges with emphasizes in poultry science.
He even held seminars for seniors in Poultry Science at Mississippi State University for twenty-five years.
Many high schools in Arkansas have purchased Jock’s book, “Brothers Four, Reliving the Great Depression and WWII.”
Please join the ATU-Ozark family in honoring our community’s veterans.