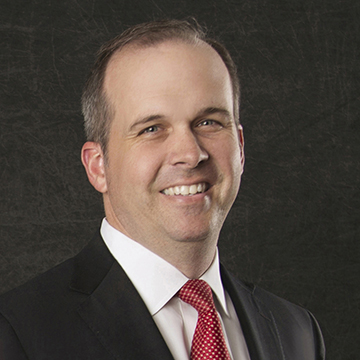 When Wayne Young needed a lift, Arkansas Tech University was there for him.

He was a sophomore at ATU when his father unexpectedly passed away in September 1997. Almost immediately, a network of on-campus support enveloped him and allowed him to continue his academic progress.

“I knew I’d made a good decision coming to Tech before, but when that happened it really drove it home,” said Young. “My fraternity brothers, my classmates, the faculty, everybody…they rallied around me and helped me make sure I didn’t get behind on any class work. As negative as that experience was in my life, being at Tech at the time made it such that I was able to make it through. It forged some friendships and I’ll never forget the folks at Tech that were there for me at that time in my life.”

Young is paying forward that kindness and support by serving as chairman of the Arkansas Tech University Foundation.

He is also a member of ATU Green and Gold in support of Wonder Boys and Golden Suns athletics and he has served as a table sponsor at fund-raising dinners for ATU scholarships.

“We’re a gritty bunch at Arkansas Tech,” said Young. “I’m part of that statistic. I was a first-generation college student, and we know that finances often end up being an obstacle. The more the ATU Foundation can do and the more the Tech family can do in terms of providing scholarships and resources to those young men and women…they’ve got that grit and they’re willing to work hard and learn. They just need that extra hand up. Often times that comes from the resources that Tech provides. I’m glad to know that I’m part of a foundation that is a rock Tech can lean on for future generations. We want to make sure everyone who seeks the opportunity to go to a great place like Arkansas Tech will have it.”

A 2000 honor graduate of Arkansas Tech with a Bachelor of Arts degree in history and political science, Young was a Bowen Scholar at the University of Little Rock School of Law. He earned his Juris Doctor degree in 2003. Today, he is a partner with Friday, Eldredge and Clark in Little Rock and a member of the firm’s labor and employment law practice group.

He was named the 2017 Russell Gunter Legislative Advocacy Award Recipient by the Arkansas Society for Human Resource Management. The award recognizes outstanding contributions of time and effort in local, state or federal legislative advocacy on behalf of the human resources profession. He is a member of Central Arkansas Human Resource Association and was awarded the association’s 2018 legislative advocacy award.

Young has been recognized for his work in labor and employment by Chambers USA: America’s Leading Lawyers for Business, The Best Lawyers in America and Mid-South by Super Lawyers where he was named “Rising Star.”

He is on the Board of Directors of Women and Children First and he is the past president of the Little Rock Downtown Kiwanis Club. He serves as general counsel to the Arkansas State Council of the Society of Human Resource Management.

Young attributes much of his professional success to the experiences he had as a member of the Arkansas Tech debate team.

“It was an invaluable tool and I made a lot of great friends doing it,” said Young. “It helped me learn and hone my persuasive communication skills, which has helped me in my work that I do today. How I think, speak and write persuasively can be traced back to lessons I learned on the Tech debate team. I’m proud that Tech offers a wide array of extracurricular activities that further enrich the learning experience.”

Learn more about the ATU Foundation at www.atualumni.com.

In Memoriam: Jerry Charles Young I

Green and Gold Give Back Planned for November 5