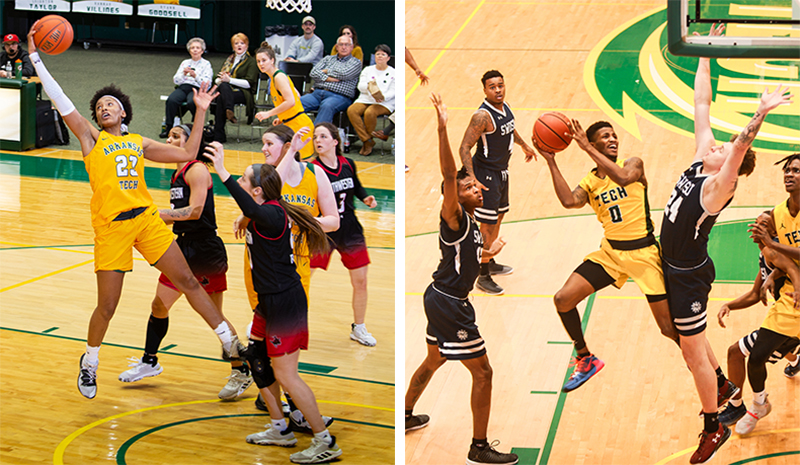 Arkansas Tech University will be on the road this week for Great American Conference basketball doubleheaders at East Central University and Southeastern Oklahoma State University.

After the games at ECU in Ada on Thursday, Jan. 30, the Golden Suns and the Wonder Boys will venture south to Durant for a 1 and 3 p.m. doubleheader against Southeastern Oklahoma State University on Saturday, Feb. 1.

A play-by-play description of Saturday’s games will also be available on KCJC 102.3 FM and www.arkansastechsports.com.

About the Golden Suns: Freshman Sarah Heard is averaging 17.7 points per game and shooting 58 percent from the field over her last three games. The 6-foot-2 forward from Cairns, Australia, has reached double figures in scoring four of Arkansas Tech’s last five contests. The Golden Suns lead the GAC in scoring offense (77.5 points per game), field goal percentage defense (.370) and rebound margin (+9.5 per game). ATU has won three consecutive games, including a 70-51 victory over Northwestern Oklahoma State University on Saturday. The Golden Suns defeated East Central 71-69 in Russellville on Jan. 4 by holding the Tigers without a made field goal for the final 6:41.

About the Tigers: East Central is in danger of missing the GAC Tournament in women’s basketball for the first time. The Tigers are in 10th place in the GAC standings with 10 regular season games remaining. Only the top eight teams in the final standings will advance to Bartlesville, Okla., for the postseason tournament March 5-8. Senior forward Sam Schwab is doing her best to provide ECU with a ninth consecutive berth in the GAC Tournament. She is averaging 14.8 points and 8.8 rebounds per game in January. The Tigers stopped an eight-game losing streak by defeating Ouachita Baptist University 78-71 on Saturday.

About the Wonder Boys: There were 20 lead changes and 14 ties in the first game between Arkansas Tech and East Central this season. The Wonder Boys came out on top 94-86 Jan. 4 in Russellville due to a 28-14 edge in points off turnovers and a season-high 35 points from R.J. Glasper. A junior guard from Forrest City, Glasper has moved into seventh place on ATU’s career assists list with 359. Arkansas Tech’s most recent road win against East Central was a 75-72 triumph on March 1, 2014. Bobby Hatchett made a 3-pointer with two seconds remaining to clinch the outright GAC title for the Wonder Boys. It was the 21st regular season conference title in Arkansas Tech men’s basketball history.

About the Tigers: Senior guard Camron Talley has 1,745 career points, second-most in ECU history and third-most in GAC history. A two-time All-GAC first team selection, Talley had 25 points at Arkansas Tech on Jan. 4 and is averaging 15 points per game against the Wonder Boys in his career. Sophomore guard Matt Garriga scored a career-high 20 points in the Tigers’ 85-71 win at Ouachita Baptist on Saturday. ECU stopped a three-game losing streak. East Central is 7-0 at home this season and 68-17 at the Kerr Activities Center during Ja Havens’ seven-year tenure as head coach. The Tigers have won nine in a row in Ada dating back to last season.