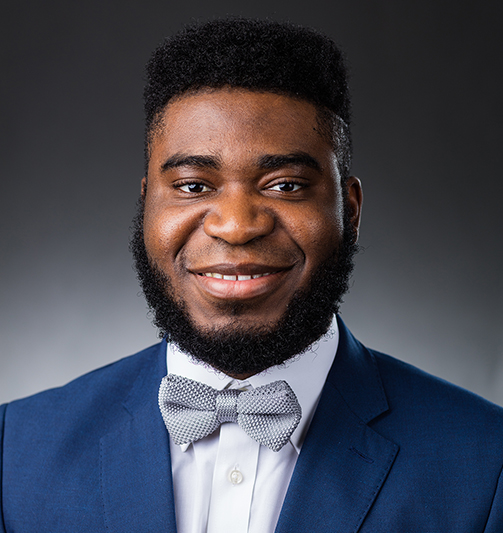 Every moment, from the time he departed his native Ireland to attend Arkansas Tech University until he was named the 2020 Alfred J. Crabaugh Award winner as most outstanding senior male student at ATU, Abiola Sasore felt the support of two people above all others.

“My brother (Temmy Sasore)…he’s my right-hand man,” said Sasore. “He mentors me every single step of the way. I hope to one day be half the man he is. My mom (Dorcas Sasore)…I just do everything for her. She’s done so much for me. I just want to give back what I can, and education is probably the biggest thing I can give back to her. When I receive an award or make an A, I’m always sure to let her know. Just to hear her say ‘I’m proud of you’ goes a long way for me.”

A native of Dunleer, Ireland, Sasore first enrolled at ATU during the spring 2016 semester. Even though he was more than 4,000 miles from home, he instantly felt comfortable in his new surroundings.

“(ATU) made me feel very important and wanted,” said Sasore. “They create a great, welcoming environment for students and in the Russellville community at large. That’s something I had back home, so I wanted to continue to feel that here.”

Not everything was the same. Sasore missed the people and food of Ireland, and he said his accent made it difficult to communicate with his fellow students in the beginning. Each of those problems had a solution. One did not.

“It is really, really hot over here in the summer…and humid,” said Sasore. “We don’t have anything like that back home.”

Ultimately, the support he felt from the people of Arkansas Tech and Russellville allowed Sasore to do more than adjust. He flourished like never before while pursuing his Bachelor of Arts degree in rehabilitation science.

“Coming from Ireland, all that I focused on was sports,” said Sasore. “I didn’t think I was a smart student back then. I was a high C, low B kind of student. After my first semester (at ATU), I was able to get a 3.8 grade point average. I was like, ‘wow, I didn’t know I had that in me.’ That motivated me to continue to concentrate on my studies.”

Sasore also found his place beyond the classroom at ATU. He fed his love for competition through intramural sports, including the activity he calls football and his American peers call soccer.

“How it’s played here is different, so learning it and comparing it has made me better as an athlete,” said Sasore.

As an orientation leader and summer ambassador, Sasore helped incoming freshmen make a successful transition to Arkansas Tech. He served on the ATU Division of Student Affairs conduct board and was selected to Who’s Who Among Students at Arkansas Tech University in 2020.

Sasore served in ATU Student Government Association and was elected secretary of diversity and inclusion. In that role, he collaborated with representatives from ATU’s food service provider, Chartwells, to ensure early-arriving international students have access to appropriate nutrition when they move on campus in advance of the fall semester.

He also applied that characteristic as a resident assistant for the ATU Department of Residence Life.

“You meet a lot of people and you learn a lot about people, and you have to be patient with them,” said Sasore about his experience as a resident assistant. “Some people will open up to you, and some won’t. That experience and learning to be patient will help me in my future workplace.”

Sasore will continue his education by pursuing a master’s degree in athletic training at the University of Central Florida.

He would like to work in professional or college athletics after his graduation from UCF. He has a long-term goal of starting a sports medicine clinic to help fill a need for those services in his native Ireland.

“Back home, we don’t really have athletic trainers or physical therapy,” said Sasore. “I had to learn how to rehab myself off YouTube videos. I learned how to apply ice and how to tape my ankle. I want to give that back to students and help them become the best athlete they can be, on and off the field.”

Regardless of which side of the Atlantic Ocean he stands, Sasore will always fondly remember his time at ATU and be proud to hold the Alfred J. Crabaugh Award.

“If you want to feel like a person, not a number, Arkansas Tech is the best place to go,” said Sasore. “It is a family environment. It has smaller classes and faculty and staff who are constantly motivating you and encouraging you to continue to be successful.

“I don’t want to take this award for Abiola Sasore,” continued Sasore. “This award goes back to everyone at home in my community, and to everyone here at Arkansas Tech who has helped me. I do this for the people I love, and I want to continue to pave the way for others.”