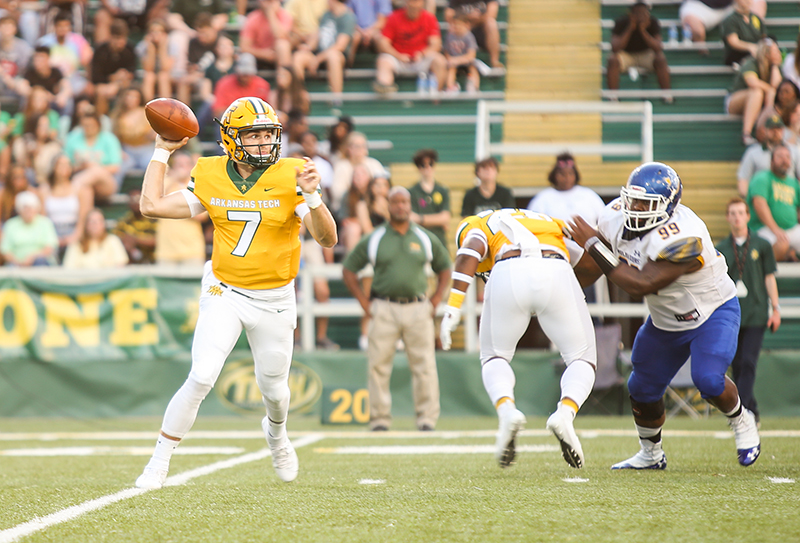 A new month brings with it a new phase of the 2019 Arkansas Tech University football schedule.

The Wonder Boys will begin a stretch of six consecutive Great American Conference games against opponents from the Sooner State when they host Oklahoma Baptist University at Thone Stadium at Buerkle Field in Russellville on Saturday, Oct. 5.

It will be Homecoming at ATU. Kickoff is scheduled for 6 p.m.

Arkansas Tech (0-4) completed the most challenging four-game stretch of its season by dropping a 35-14 decision to Southern Arkansas University last Saturday. The score was tied 14-14 in the fourth quarter until a pair of Wonder Boys’ turnovers in the closing minutes helped the Muleriders pull away for their first road win over ATU since 2007.

“We have some young guys who have to get better at focusing,” said Kyle Shipp, ATU head coach. “I’m very proud of the way we played (against SAU) for three quarters and seven minutes. We just have to figure out a way to finish better.”

Junior quarterback Preston Haire is the focal point for Oklahoma Baptist. He is averaging 335.8 yards in total offense per game, most in the GAC and fifth-most in NCAA Division II.

“You can definitely see from last year to this year (Haire’s) progression in making more intelligent throws,” said Shipp. “He can run, and he can make almost every throw on the field. That’s the No. 1 thing defensively: know where No. 12 is. If we don’t know where he is, he’s going to make us pay all day long.”

The bad news for the Bison is they are allowing even more passing yards than they are gaining. Oklahoma Baptist ranks last in the GAC and 164th in NCAA Division II in pass defense (311.8 yards allowed per game).

That could be just the medicine the Arkansas Tech offense needs as it looks to build consistency with new quarterback Mason Cunningham at the helm. A transfer from NCAA Division I Liberty University, Cunningham saw his first action as a Wonder Boy last Saturday and completed 14-of-26 passes for 130 yards.

“Mason did a really good job of preparing himself,” said Shipp. “He has taken all the No. 1 reps in practice this week, and I think that is going to benefit him. I feel very confident about what Mason can do for us. He is a very intelligent young man who is pursuing his Master of Business Administration degree with a 4.0 grade point average. I can’t speak any higher of a young man. He just has to continue to learn what we are doing offensively and get better from week to week.”