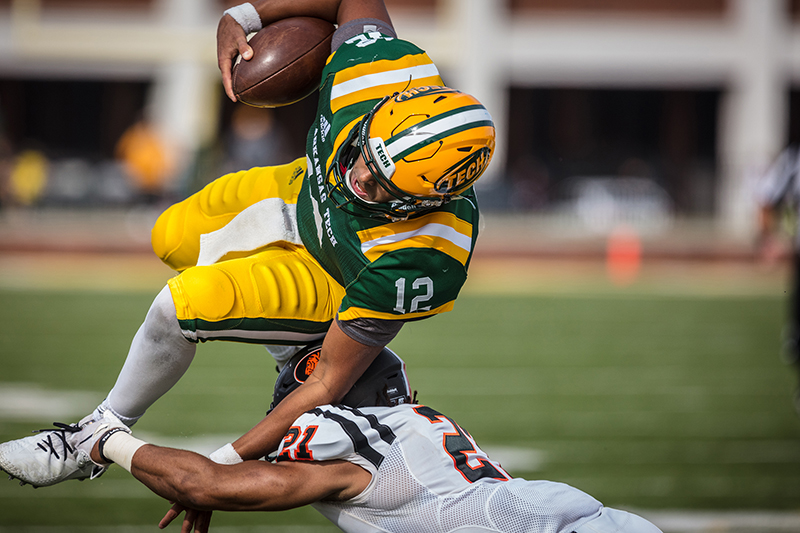 The time has arrived for the 105th Arkansas Tech University football team to face the fire of competition.

The Wonder Boys will make their 2019 season debut against the University of Arkansas-Monticello Boll Weevils on Thursday, Sept. 5. Kickoff for the Great American Conference contest at Convoy Leslie Cotton Boll Stadium in Monticello is set for 6 p.m.

Live coverage will be available on KCJC 102.3 FM and www.arkansastechsports.com.

“You don’t know who you are until you get put in hard situations,” said Kyle Shipp, who will make his debut as ATU head coach. “We’re going to be put in difficult positions multiple times (at UAM). It’s going to define our football team early in this season…how we react to those things. We’ll find out a lot about us.”

Shipp has stopped short of naming a starting quarterback for the UAM game. Manny Harris was the first name he mentioned when asked about the candidates. Harris, a senior from Copperas Cove, Texas, recovered from an early-season injury to complete 77-of-152 passes for 773 yards and three touchdowns for the 2018 Wonder Boys.

“I thought (Harris) did a great job of learning the whole offense from spring, summer to now,” said Shipp. “He was probably the most consistent, so there’s a chance you might see him (at UAM).”

Sophomore Carter Burcham of Greenbrier and junior Mason Cunningham of Shelbyville, Tenn., are the other quarterbacks on the ATU depth chart.

Burcham completed 92-of-165 passes for 1,208 yards and five touchdowns for the Wonder Boys last season.

Cunningham is a graduate transfer from Liberty University, where he appeared in three games over two years and completed a bachelor’s degree. Cunningham began his college career at Northeast Mississippi Community College, where he passed for 1,810 yards and 12 touchdowns in 2016.

“Carter Burcham did a good job of retaining and then learning new stuff,” said Shipp. “He had some really good days in camp, and I think he’s a kid who can definitely help us win games. Mason Cunningham was new to us this summer. He did a good job. He’s a little bit behind the other two, but if he needed to go in the game I feel very comfortable with him as well.”

Tech’s initial strength on the other side of the ball might be its defensive line. Shipp believes that unit has approximately 12 players who are ready to contribute on a rotational basis.

“Anytime you are good up front on the defensive side, it’s so much easier for the linebackers and the guys on the back end,” said Shipp. “It makes you a better football team, and we have a very good core group of defensive linemen. We have to stay healthy, but as far as ability, playmaking and doing what they are coached to do, we have a solid group.”

Tech’s defense will be asked to stop a UAM offense that returns seven starters. One of the few missing pieces from a year ago is Cole Sears, who was a three-year starter at quarterback for the Boll Weevils before completing his eligibility in 2018.

His successor is Caleb Canady, a sophomore that Shipp was integral in recruiting to UAM during his five-year stint as the Weevils’ offensive coordinator from 2014-18. Canady and Shipp are both from Morrilton.

“I’ve known Caleb basically since he’s been born,” said Shipp. “He got better over his senior year (at Morrilton High School) and we ended up signing him (at UAM). He has continued to improve, and I think he will have a good career at UAM. Hopefully, it’s just not a career night this week.”

Thursday will mark the 76th meeting between ATU and UAM. The Wonder Boys lead the series 45-27-3, but the Boll Weevils have won the last two meetings and the series is even 4-4 during the GAC era (2011-present).

For Shipp, the season opener is another step in a process intended to return Arkansas Tech to the upper echelon of GAC football.

“We got a lot of things accomplished during fall camp in all aspects…offense, defense and special teams,” said Shipp. “Hopefully, we’ll show those things off. We’re just trying to get the culture changed. We need to improve at every position, but the first place to start is culture…how you play and how you practice daily.”