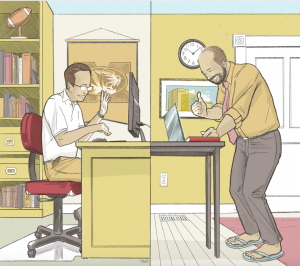 Both men are heads of their organizations, but they each serve a different field. Eliah is in his first season as the head football coach at the University of Missouri, and Jeremy is the president of Mercy Hospital in Joplin. 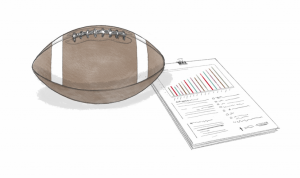 “I will say we’re very fortunate in Joplin,” said Jeremy, a 2003 health information management graduate. “We don’t have a lot of COVID-positive patients, which has been good for us. Everything turned into how to prepare for the worst-case scenario because the hardest thing about COVID is that nobody knows much about it.”

Meanwhile, Eliah was determined to keep his team focused to win on the field this fall. 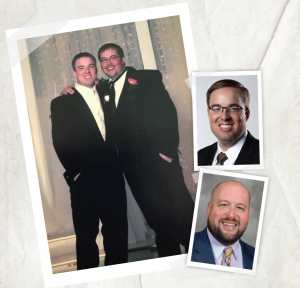 “Every day you just get handed a set of obstacles, and it’s your choice on how you’re going to handle it based on your attitude and your effort, your toughness and your discipline,” said Eliah, a 2004 secondary education graduate. “And so, for us, we’re just trying every single day to do the very best we can with the information we have. We’re presenting it to our guys like this is an opportunity for you to practice your mental toughness, control your attitude and your effort and push forward to be the very best that you can be.”

That toughness is a challenge Eliah’s learning to overcome as a coach.

“I think [with] adaptability and pliability, coaches are usually pretty rigid and pretty routine-oriented,” Eliah explained. “Obviously, this is shaking everybody’s routine, and we’re not exactly sure how this is going to shake out for everybody as far as what the NCAA does. It’s going to be even more about what my philosophy is from a coaching standpoint, which is always preference versus performance. We all have preferences, but it’s not about each individual preference. It’s about what’s best for everyday performance. What’s best for our team’s performance.” 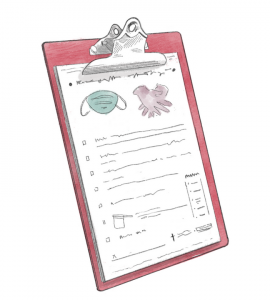 For Jeremy, the biggest challenge is encouraging people to think creatively to solve the problems at hand and to anticipate what is coming.

“There is no playbook,” said Jeremy. “There is no roadmap right now within this…I think the couple of things that have been important and good learning for me is that we can do things quickly in healthcare…We can pull it off much quicker than what people anticipated. That’s going to be the new norm going forward. I think it’s important for healthcare as we still try to be more adaptable, more efficient, we’ve got to keep driving down costs.”

That focus on flexibility is part of what Jeremy said has helped him have success in his tenure as a hospital administrator.

“I think that the easiest thing to say, but the hardest thing to execute is to challenge the status quo,” said Jeremy. “And I think one of the things that I do well is that I don’t go into a meeting with our team and our leaders and say, ‘Here’s what I think we should try.’ I come in and say, ‘We’ve got to try something.’ And I push them to start them thinking creativity, to put some different ideas on the table…If it’s me coming up with the ideas all the time, we’re never going to get buy-in.” 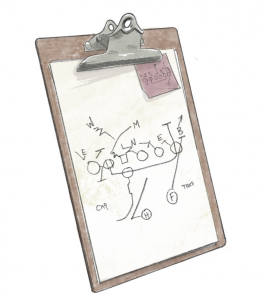 For Eliah, his success is also about getting everyone to believe in the same goal.

“The thing for me is, regardless of whether it’s the SEC, being the head seventh-grade coach at Alma, Appalachian State or wherever we’ve been, it’s about getting everybody united on the same mission and pushing in the same direction…I think what is so exciting about football is you get that collection of wills all pushing in the same direction and you get to see if it worked every week. You get to face the adversity of winning, and you get to face the adversity of losing, and then you’ve got to go replicate that and do it again. And that’s a lot of fun. And it’s a great challenge.”

During their time as atu students, both brothers honed their personal visions and grew as individuals as they planned out their future careers.

“I went to school originally to be a lawyer,” said Eliah. “I thought I was going to go, major in poly-sci and try to get into law school. I got into this mold of thinking that coaching might be a better avenue for who I was when I was passionate about and actively involved in intramurals. Being from Alma, I had a connection with coaches there, and that’s really where it started.”

That connection meant he needed Arkansas Tech to put his education first.

“I had a relationship with Gus Malzahn [former coach at Springdale High School and current head football coach at Auburn University], and at that time, Arkansas Tech really didn’t have any avenues to do an internship at Springdale, Arkansas,” said Eliah. “I had made connections and wanted to utilize them. The education department was very accommodating in helping me to allow that to happen, knowing it would be best for me. I don’t know that I would be a head coach in the SEC had I not gotten the ability to do my student teaching there.”

For Jeremy, his vision focused around taking classes that prepared him for a future in the healthcare industry.

“I knew that medical records were one of the most important things in healthcare,” said Jeremy. “Knowing the information and all the parts allowed me the ability to learn about different aspects within the hospitals’ or clinics’ standpoint.”

Both brothers were active in campus life and during their time as Arkansas Tech students.

Jeremy also learned firsthand through several of his leadership roles, including being on the Student Activities Board and serving as president of the Student Government Association.

“You learn a lot in all those situations,” said Jeremy. “You know, leadership is about conflict, taking stances you believe in and knowing to have an open mind.”

Arkansas Tech played a special role in the lives of both brothers by preparing them to lead in their careers.

“I thought [ATU] was the right opportunity for me to grow and succeed as a person, not only within academics, but I felt like the social aspect was going to fit who I was,” said Jeremy. “I felt like it was going to empower me to do what I wanted to do, and I felt like I could accomplish whatever I wanted to accomplish, within my career by getting a degree at Arkansas Tech.”

Jeremy added, “I love Arkansas Tech because it really put the final pieces of the foundation I needed to be successful and not just from an education standpoint. I got that, but it also allowed me to have that from my relationship standpoint. It gave me the space…to shape me to be who I am today, and it gave me the ability to have different experiences to interact with different people.”

While the Drinkwitz brothers are happy that ATU helped prepare them to become successful leaders, the university also holds a special place in their lives because of the role it played in strengthening their bond as brothers.

“We always had that younger brother—older brother competitiveness going through, and we learned to become the best of friends in our time at Arkansas Tech,” recalled Jeremy. “And that has really been a big part of our lives going forward, but I don’t know if that would have happened if we didn’t both go to Tech at the same time.” 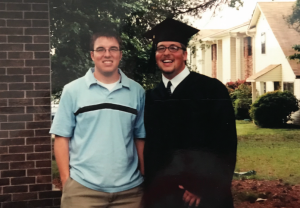 It puts a new spin on the meaning of ATU family.

-By Carrie Harris Phillips
Illustrations by Bryan Moats
for the Tech Action, Fall 2020